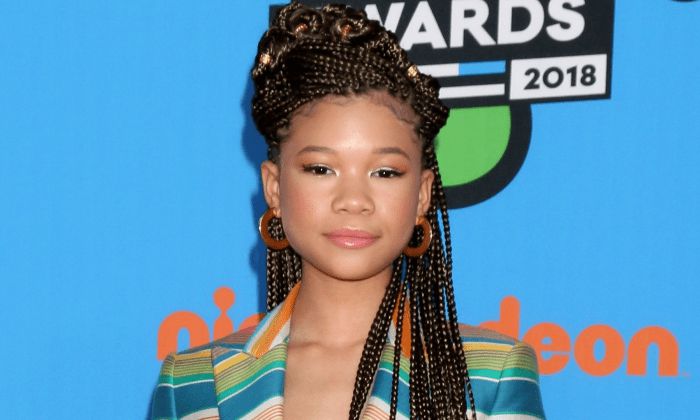 Storm Reid is an American actress who gained fame in her early acting career for her role as Emily in the Academy Award-winning film ’12 Years a Slave’ in 2013. She played Meg Murry in the fantasy film ‘A Wrinkle in Time’ and Abigail in the dark comedy film ‘Killing Winston Jones’.

In 2019, she grabbed the lead role of Gia Bennett in the Netflix teen dram ‘Euphoria’ and went on to voice Nia on Hulu’s ‘The Bravest Knight’.

Storm Reid was born on the 1st of July 2003, in Atlanta, Georgia, United States of America. She’s currently 18 years old.

Storm Reid is the daughter of Rodney Reid and Robyn Simpson. Her father is a personal trainer and life coach and her mother is a film and TV producer and owns a production company called Seed & Wings Productions. She has three siblings, an older brother, Josh Reid, two elder sisters, Iman, and Paris Reid.

She attended Chestnut Charter Elementary School located in Dunwoody, Georgia. Due to her overwhelming acting career, she got enrolled in a homeschooling program.

The dusky actress is currently single as she was never seen dating anyone publicly. Storm Reid is quite reluctant and rarely opens about her private life. Furthermore, she has perpetually managed to keep her personal life away from the spotlight and it looks like that nothing has attracted her more than acting.

Storm got her start as an actress at a very young age with a small role in the Academy Award-winning period drama film, 12 Years a Slave, as Emily in 2013.

Before her feature debut, she had appeared in short films like ‘The Girls of Summer’ and ‘the Spirit Game’ in 2012 and 2013, respectively.

Storm made her small screen debut with the television movie called ‘A Cross to Bear’ in 2012, in which she played the younger version of Erica.

In 2013, she landed a role in an episode of the Nickelodeon series ‘The Thunderstorms’ as Avery.

Storm Reid is one of the finest actresses in Hollywood with several prominent acting roles to her credit. Her portrayal of Emily at age nine in the Oscar-winning drama ’12 Years a Slave’ (2013) helped her to capture the limelight in the mainstream. The biographical period drama movie also starred Michael Fassbender, Paul Dano, Benedict Cumberbatch, Paul Giamatti, and Brad Pitt.

In 2018, she played one of the protagonists, Meg Murry in Ava DuVernay’s A Wrinkle in Time, based on the novel of the same name. This is one of the crucial roles in her career that earned her a lot of fame as well as fetched her roles in the Netflix latest teen drama ‘Euphoria’. She plays the character of Gia Bennett, Rue’s 13-year-old younger sister. The series also starring Zendaya, Maude Apatow, Sydney Sweeney, Alexa Demie and others.

She began her career in showbiz at age three when she was booked for a Tv commercial.

She landed her first acting gig with a small role in a short film at age nine.

Storm learned Portuguese along with mastering a different accent for her role of Aki in Lea to the Rescue (2016).

She hopes to become a filmmaker someday with the help of her parents.