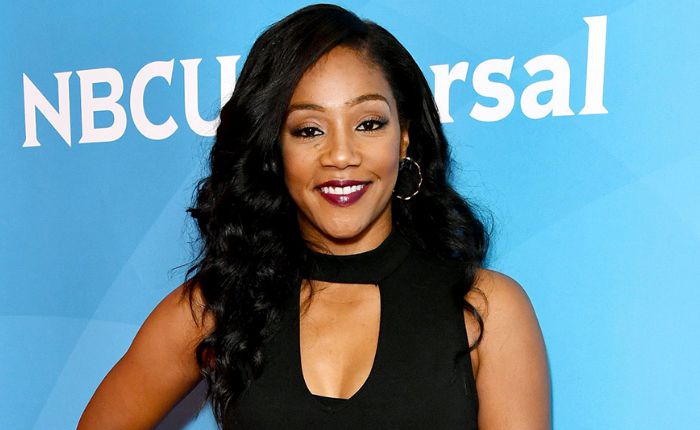 Tiffany Haddish is an American actress and comedian who gained a lot of attention after starring as Jackie on OWN’s sitcom ‘If Loving You Is Wrong’. She is also known for her portrayal of Nekeisha Williams on the NBC sitcom The Carmichael Show and went to earn critical acclaim for her role as Dina in the 2017 film Girls Trip. She did a lot of comical shows and guest appeared on television before gaining fame as an actress.

Haddish was born to Tsihaye Reda Haddish and Leola. Her father was a refugee from Eritrea. Her mother remarried after her biological father left the family when she was three years old. She has two half-sisters and two half-brothers.

Tiffany married her estranged husband William Stewart twice and eventually divorced him twice in 2011 and 2013. They had an unstable relationship throughout their marriage life. In her memoir, she mentioned that her estranged husband helped her locate her biological father who walked her down the aisle at their first wedding, which she once described as “one of the happiest days of my life.” She has also stated that she has been a victim of domestic violence and had once taken a restraining order against him when he attacked her in July 2010 in a Montreal-based hotel.

Tiffany Haddish made her acting debut as Jancie Green in the movie ‘The Urban Demographic’ in 2005.

In 2005, Haddish appeared as herself in the MTV show ‘Pimp My Ride’.
In her first television appearance, she was featured in an episode titled ‘Rashae’s Ford Taurus’.

The same year, she starred as Charlotte in an episode of the American supernatural sitcom ‘That’s So Raven’.

Tiffany got her first breakthrough with the film, ‘Girls Tip’, a 2017 comedy film. It went on to become a massive success at the box office and was declared the highest-grossing comedy of the year. She received positive acclaim and several awards, including Black Reel Award for Best Supporting Actress and MTV Movie Award for Best Comedic Performance for her performance in the film.

She gained a lot of fame and popularity for her roles as Jackie in If Loving You Is Wrong., Nekeisha Williams in The Carmichael Show, and Shay in The Last O.G.

Tiffany’s net worth is estimated to be $4 million.

Tiffany’s early life was tragic and miserable after her mother met with a car accident that caused her severe brain damage, leading to schizophrenia. She was just nine years old then and the car accident happened due to her step-father tampering with the brakes of her mother’s car.

At 12, she and her younger siblings were temporarily put into foster care until her grandmother took custody of them when she was 15.

While in high school, she participated in school drama competitions and also attended the Laugh Factory Comedy Camp to get relief from stress.

She used to live in her car in Beverly Hills before her onscreen success. She also did a number of odd jobs, including customer service for Alaska Airlines.

She published her memoir “The Last Black Unicorn” in December 2017, which debuted at number 15 on The New York Times best-seller list

Tiffany has voice roles in the Netflix animated comedy series ‘Tuca & Bertie’ and in ‘The Lego Movie 2: The Second Part’, both scheduled for release in 2019.

In 2018, she won the BET Awards for Best Actress and Black Reel Awards under the categories Best Supporting Actress and Outstanding Breakthrough Performance (Female) for her role in the movie Girls Trip.

In 2021, she won the Grammy Award for “Best Comedy Album” for the 2019 Netflix special, Tiffany Haddish: Black Mitzvah.

In January 2022, Tiffany was arrested for DUI after she was found to be under influence of marijuana. She was booked at Fayette County Jail and later released the same day on a $1,666 bond.