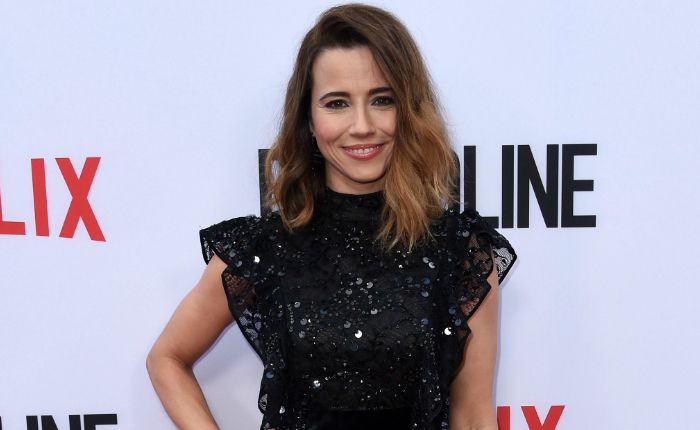 Linda Cardellini is an American film and television actress best known for her roles as Velma Dinkley in the Scooby-Doo live-action film series and Laura Barton in Avengers: Age of Ultron. She played Sylvia Rosen on Mad Men for which she received an Emmy Award nomination and also appeared in TV series like Freaks and Geeks, ER, and Bloodline. She landed voice roles in TV series, including Regular Show, Gravity Falls and Sanjay and Craig.

She has Italian, German, English and Scottish ancestry.

Cardellini graduated from Saint Francis High School in Mountain View, California in 1993. She studied theatre arts at the Loyola Marymount University‘s College of Communication and Fine Arts, graduating in 2000.

Cardellini was born to Lorraine (née Hernan), a homemaker, and Wayne David Cardellini, a businessman. She has three older siblings.

Cardellini has been in a relationship with her longtime boyfriend Steven Rodriguez since 2009. The couple welcomed their first child, a daughter named Lilah Rose on February 29, 2012. They both got engaged in June 2013.

Previously, she dated her Freaks and Geeks co-star Jason Segel for almost six years from 1999 to 2007.

Cardellini’s first acting role was as Sarah in the kid’s television series Bone Chillers in 1996.

In television, she is most widely recognized for her portrayals of Lindsay Weir in Freaks and Geeks, Samantha Taggart in ER, and Meg Rayburn in Bloodline.

Linda Cardellini has an estimated net worth of $3 million.

She developed interest in acting at a very young age after performing in school productions and community theater.

She won fireplace in a 1994 episode of the American game show The Price Is Right.

Cardellini received her first Emmy nomination for “Outstanding Guest Actress in A Drama Series” for her role in the critically acclaimed AMC series, Mad Men.

She took martial arts classes at a young age.

In 2009, Cardellini won the TV Land Awards for her work in the TV show ER.

In 2011, she received an Independent Spirit nomination for her performance in Return.