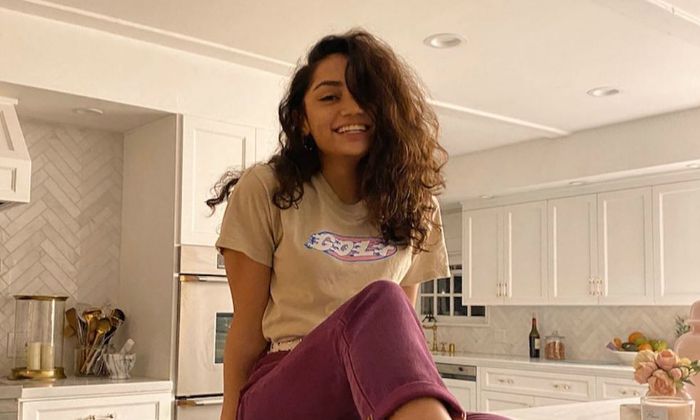 Despite being only 20 years old, American beauty guru Avani Gregg has already become a successful social media influencer. Hailing from Indiana, this sensational TikToker found fame through a series of ClownCheck videos, which earned her 3 million TikTok followers in just a couple of weeks. She has now amassed more than 25 million followers on the short video-sharing app, thanks to a wide range of videos including comedy, dance, challenge, and transitions she uploads to her TikTok account. Avani’s ever-growing popularity has earned her a role in the Brat TV web series Chicken Girls.

Avani Gregg was born on the 23rd of November 2002, in Indiana, United States of America. She is currently 20 years old.

Very little is known about Avani Gregg’s personal matters. Her father is of African-American and Mongolian descent while her mother Anisha Gregg is of Indian ancestry. She has two sisters, Priya and Shanti, who is also social media personality.

She hasn’t shared anything when it comes to her educational history or the schools she attended. Aavani is a gymnast and began training when she was just 4. But she quit while she was in level 9 after sustaining a back injury.

Avani Gregg is currently in a relationship with Anthony Reeves, who is also a social media celebrity and TikTok star. The couple confirmed in December 2019 that the two were dating for a while and they are going strong still. You can find a ton of pictures of them being together on their respective Instagram accounts.

Having grown up watching videos on YouTube, she discovered her passion for makeup and launched her eponymous YouTube channel on June 9, 2015. However, she posted her first video, a vlog on how she broke her back, in March of 2018 that would eventually go on to garner a few thousand views. She soon followed up with similar videos but she is not so regular when it comes to uploading videos.

Her channel has less than 20 videos but she’s attracted an audience of over 360 thousand subscribers and earned tons of views for each. A few months later she joined other social media platforms including Instagram and musical.ly (now TikTok).

Avani Gregg quickly became popular on TikTok, thanks to the makeup and challenges-based videos. She has made a name for herself with her unique videos and has already gained an impressive following of 25 million fans on the app. With a strong social media presence, Avani shares a lot of pictures from her everyday life on her Instagram account. In addition to that, she uses her ever-growing social popularity to connect with fans all over the world and promote products and brands. She’s got nearly 19 million followers on her @avani account.

At such a young age, Avani Gregg has achieved a lot of fame and success than many of her peers. She will likely enjoy a long and successful career thanks to her efforts at such a young age. Avini is also on Twitter, where she has over 420 thousand followers.

As a passionate vlogger, Avani Gregg has already made her mark in the creative industry. She has a net worth of $3 million dollars, as of 2023.

She jumped on the social media bandwagon at the age of 14 years old.

Besides makeup transition and challenges, she has also posted lip-sync videos to the tunes of popular songs including “Say So” by Doja Cat, “Off the Wall” by XXXTentacion, “In The party” by Flo Milli, and many more.

Going by her Instagram bio, she’s represented by The Green Room and Abram Artist.

She’s partnered with the Depop app to sell her own line of merchandise.