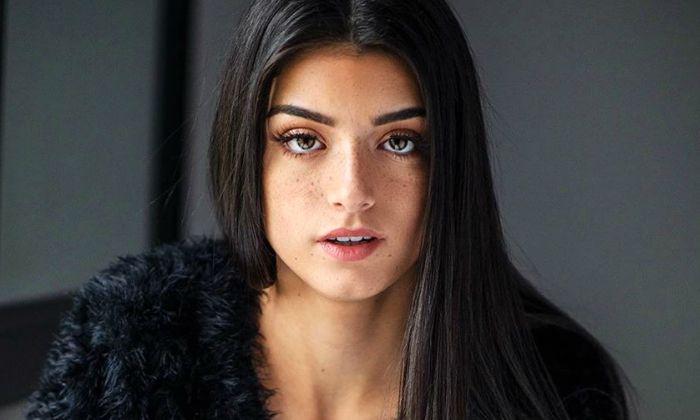 Dixie D’Amelio is an American TikTok star and social media celebrity who is better known as the elder sister of Charli D’amelio, another big name in the TikTok world. She has amassed quite a large fan following on the short video-sharing app, which currently clocks at 35 million followers, but not anything closer to the popularity of her younger sister.

The Norwalk native gained prominence by sharing racy pictures to her self-titled Instagram page and later jumped onto the TikTok bandwagon. She regularly collaborates with her sister, Charli, and other popular TikTokers, in making videos. The sisters, Dixie and Charli, became a member of the LA-based TikTok collaborative collective The Hype House in early 2019. In January 2020, they signed with the talent agency UTA. As of 2023, Dixie D’Amelio has a net worh of $3 million.

Dixie D’Amelio was born on the 12th of August 2001, in Norwalk, Connecticut, United States of America. She is currently 20 years old.

Talking about her family, Dixie D’Amelio is the oldest of two girls to American parents Marc D’Amelio and Heidi D’Amelio. Her mother is a photographer while her father is a businessman and a Republican who was a board of education candidate in Norwalk, Connecticut.

Her younger sister, Charli D’Amelio, is also a TikToker and social media personality, who has accrued huge followers on different social media platforms, especially on TikTok and Instagram.

Dixie attended King School in Stamford Connecticut, where she played hockey for the school team. Furthermore, she also took part in track and field during her high school days and played lacrosse as well. She also competed in the Midget Girls race at the 2012 Connecticut Junior Olympics.

Concerning her love life, Dixie D’Amelio is in a relationship with TikTok star Noah Beck. They made their public debut together at the 2021 Billboard Music Awards.

She was previously in a romantic relationship with her high school boyfriend Matt Garavel. They attended the same school and have very much liking for sports. He’s a rising young footballer. She posted a lot of pictures with him on her Instagram page, but he hasn’t shown up on her feed since August 2019. As such, there has been a lot of debate going on in the comment section of her Instagram page but most of her fans speculate that she’s no longer dating him. Bit nothing has been confirmed as she hasn’t shared an update herself.

Dixie D’Amelio’s internet fame began when she launched her Instagram account in 2015. Just like many Instagrammers out there, her pictures and videos soon caught the attention of the people that eventually bolstered her online popularity, thanks to her charming and attractive looks.

She shares a close relationship with her sister, Charli, who resembles more like her, despite not being twins. They often appear together on each other’s Instagram page as well as on all possible social media platforms.

At the time of writing, she has over 25 million people following her on the photo-sharing app. Not long after that, she shifted her focus towards the short video-sharing app, TikTok, which is the most popular app among Gen Z.

She gained over 8 million Tiktok fans within a year of joining the app, making her one of the fastest rising TikTok sensations. With her growing popularity across social media platforms, she was invited to local meet-ups and social media events, including the Mistle Tok Meet-Up.

According to sources, Dixie’s net worth is estimated to be about $3 million dollars in 2023. Apparently, all the money she has comes from endorsement and sponsorships. In December 2019, the D’Amelio sisters hosted a Christmas-themed greet and meet event called “Mistle Tok” in Greenwich, Connecticut, for which they charged $25 for VIP passes that allowed them to get to meet her and spend some time with her. They donated all the money to charity.

In 2020, Forbes reported that Dixie was the third highest-earning TikTok star with earnings around $2.9 million between June 2019 and June 2020 from sponsorship deals and merchandise.

She is an aspiring model and developed an interest in modeling from a young age.

She bears a striking resemblance to her sister Charli.

Dixie has over 35 million TikTok followers.

She is a good dancer and has been dancing since a very early age – some of her dancing videos can be found on her TikTok account.

She has a self-titled YouTube channel with over 7.5 million users subscribed to it. The channel features a video of her trip to Italy in 2017.

Dixie loves exercising and spends a lot of time at the gym that’s the secret of her attractive physique.

She is a part of the Los Angeles-based TikTok collaborative collective The Hype House.

She signed with the talent agency UTA in January 2020.

Dixie has made collaboration videos with fellow social media stars like Bryce Hall, Daisy Keech, and many others.

She has issued several singles so far, including the US Bubbling number one “Be Happy”, “Naughty List”, “Fuckboy”, and “Psycho”.