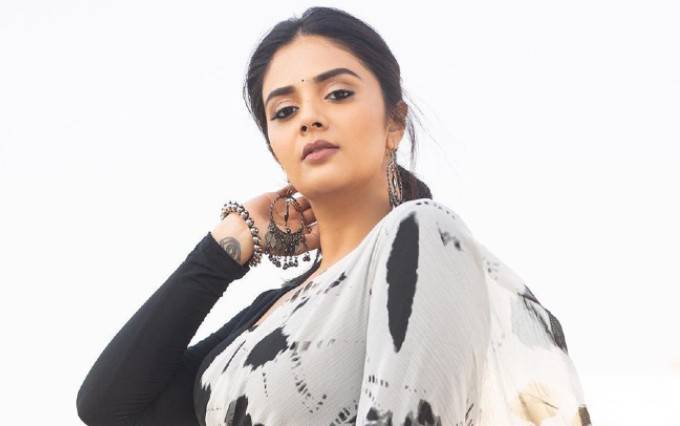 Sreemukhi is a popular Indian actress, who is best known for her works in Telugu cinema. She ventured into showbiz as a television presenter and worked as a host on leading Telugu channels such as ETV and Maa TV before plunging into films. The young talented beautiful actress has worked in Telugu and Tamil films.

Sreemukhi was born on the 10th of May 1993, in Nizamabad, Telangana, India. She is currently 28 years old.

Not much is known about Sreemukhi’s parents and early life. After high school, she enrolled to Dental Surgery in a reputed college but she dropped out to pursue a career in acting.

Sreemukhi is kind of a person who rarely opens up about her personal life and thus we could hardly find any information related to her past or present relationships.

Sreemukhi made her theatrical film debut with the 2012 Telugu film, Julayi, in which she portrayed Raaji. It was her minor role in the film.

The following year, she made her leading role debut in the Telugu film, Prema Ishq Kaadhal, which made her known to the mass population.

Her media career kick-started when she was asked to host a television show Adhurs, following which she also hosted Telugu singing reality show, Super Singer 9.

Unfortunately, we do not know the exact net worth of the actress since she had done only a few movies. Thanks to her modeling gigs and TV shows, it is safe to say that she has a hefty net worth.

From her childhood, she wanted to become a doctor, and eventually enrolled to study BDS. However, she dropped out in her sophomore year, after film offers knocked on her door.

Sreemukhi started off her film career at the age of 19.

She caught the attention of people after she appeared on television shows.

She instantly gained fame among the television audience, thanks to her next-door girl appeal, good looks, and charming onscreen persona.

Her increasing popularity within the television industry landed her in films, and eventually, she has now reached greater heights in a couple of years.

Sreemukhi had once weighed 96 kg and drastically reduced it through a strict diet and rigorous workouts.

She’s a multi-lingual, who can speak fluently in Telugu, Tamil, Malayalam, Kannada, and English.

Her family has roots in North India, basically, they belong to the Rajput clan.