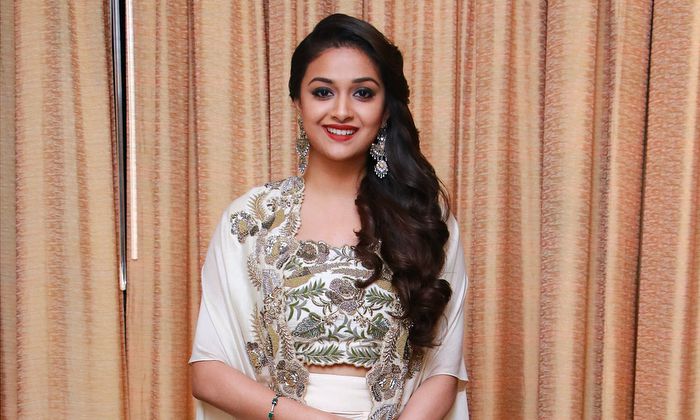 Keerthy Suresh is an Indian actress probably best known for her appearances in such films as Geethaanjali, Idhu Enna Maayam, Rajini Murugan, Nenu Local, Sandakozhi 2, and Sarkar among others. She received many awards for exceptional performance by giving life to the character Savitri in the film Mahanati, including National Film Award for Best Actress and Zee Cine Awards, and Filmfare Awards for Best Actress. She has also appeared in TV serials such as Santhana Gopalam and Krishna Kripa Sagaram.

Keerthy Suresh was born on the 17th of October 1992, in Chennai, Tamil Nadu, India. She is currently 29 years old.

Keerthy Suresh is the youngest daughter of film producer and director Suresh Kumar and actress Menaka. Her older sister, Revathy Suresh, is currently working as a VFX specialist and had formerly worked for Red Chillies, a Shahrukh Khan production company.

Keerthy did her schooling in Chennai until class four and later moved to Kerala with her family. She attended Kendriya Vidyalaya in Pattom, Thiruvananthapuram. She then moved to Chennai where she enrolled at Pearl Academy and graduated with a Bachelor’s degree in Fashion Design.

Keerthy likes to keep her personal life as private as possible, so she’s never shared any information about her relationship status with the public.

Keerthy entered the film industry at an adolescent age. Her first role was as a child artist in the 2000 Malayalam film Pilots.

She first debuted as a lead actress in Geethaanjali playing the role of Geetha / Anjali in 2013.

Keerthy first appeared on a Malayalam soap opera Santhana Gopalam as a child artist in 2004.

As a part of movie promotions, she has appeared on several TV shows.

Keerthy Suresh has endorsed a number of famous brands including Chennai Silks and appeared in a dozen TV commercials.

The budding actress with next door girl appeal is the trendiest and coolest actress in the business. With good looks, a stunning physique, and great talents, Keerthy is a marketable actress in the industry and thus she is the favorite artist for many directors. Keerthy Suresh has an estimated net worth of US$2 million. Outside the screens, she makes money out of endorsement deals and commercials.

It’s no doubt that Keerthy is one of the finest actresses in the entertainment industry, known for her chubby smile. Keerthy Suresh owns a Jaguar XJ and a couple of other cars. She owns a couple of houses, one in Chennai and the other in Kerala. Both houses are exquisitely designed with all the modern features and amenities.

Keerthy Suresh has won the hearts of millions of audiences with her mind-blogging performances in movies. She is the household name of Tamil Nadu who has starred with top actors in the industry. Her popularity can be attributed to her fan following on social media platforms. Follow her on:

Born and brought up in a family with a cinema background, Keerthy Suresh followed the footsteps of her mother and established a name for herself in the entertainment industry.

Her father Suresh Kumar was a renowned director and producer while her mother Menka was a reputable actress. She ventured into showbiz at an early age acting in movies and television serials.

After completing her graduation, Keerthy returned to the industry as a lead actress.

The damsel landed her first lead role in Priyadarshan’s Malayalam horror-comedy, Geethanjali while she was still in college. The film went on to emerge as a hit at the box office, which gained her mixed reviews for her performance.

Keerthy won the 2014 South Indian International Movie Award for Best Female Debutant and the Asianet Film Award for Best New Face of the Year for her performance in Geethaanjali.

In 2018, she made her debut as a playback singer and recorded the song “Pudhu Metro Rail” for Vikram’s Saamy Square.