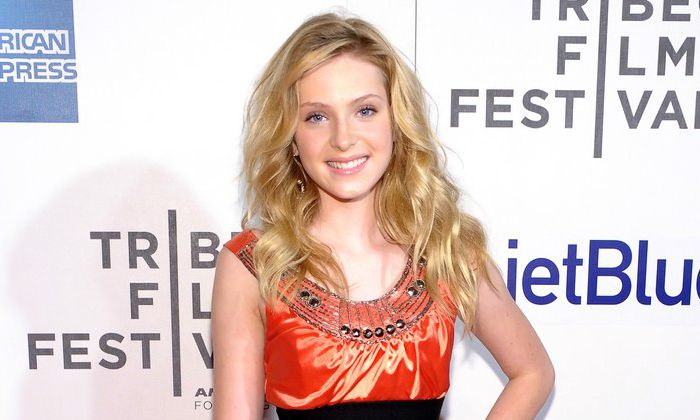 Saxon Sharbino is an American actress who caught the spotlight for her roles as Amelia Robbins in the Fox series ‘Touch’ and Kendra Bowen in the 2015 remake of ‘Poltergeist’. She is the older sister of actress Brighton Sharbino. Her other acting credits include ‘I Spit on Your Grave’, ‘Bedeviled’, ‘American Vandal’, ‘Freakish’ and ‘Lucifer’.

Saxon Sharbino was born on the 11th of June 1999, in Lewisville, Texas, United States of America. She is currently 22 years old.

Saxon Sharbino is the oldest of three to Angela and Ron Sharbino. She has two younger siblings, sister, Brighton Sharbino and brother, Sawyer Sharbino, both are actors.

She is of Cajun French, English, Scottish, German, and 1/16th Danish/Greenlandic descent on her father’s side and English and German on her mother’s side.

Saxon attended Bridlewood Elementary School and then studied at the Downing Middle School. After completing middle school, she dropped out to further her studies through homeschooling. She began acting at age 9.

As for her romantic life is concerned, Saxon doesn’t have a boyfriend nor has she married before. She is reluctant and rarely opens about her private life. Furthermore, she has always managed to keep her personal life away from the limelight and it appears that she is very much focused on acting and happily living a single life.

Saxon made her big-screen debut, playing a small role as Ed’s Daughter in a revenge thriller, ‘Red, White & Blue’, in 2010.

Her small-screen debut came at just 9 years old when she landed a minor role in an episode titled “Every Rose Has its Thorn” of the teen drama series ‘Friday Night Lights’. She was cheering on Zach Gilford‘s character in the role of an emotional fan in the series.

She began her professional acting career at a young age of nine and has since appeared in a number of TV shows and movies.

Her biggest role to date came in was as Amelia Robbins in the short-lived Fox drama series ‘Touch’ in 2013.

Saxon was handpicked by hundreds of actresses to play the lead role in a gritty spy pilot for FOX. In fact, she was just 12 years old at that time and secured the role despite the creators were looking for a 17-year-old girl. However, the show was later shelved.

Not long after, her hard work and patience paid off when Sharbino was booked as a series regular on the Fox hit series Touch, in which she starred alongside Kiefer Sutherland and Maria Bello.

The role went to her because the creators were pretty much impressed with her earlier audition and made a call that she would perfectly go with the character.