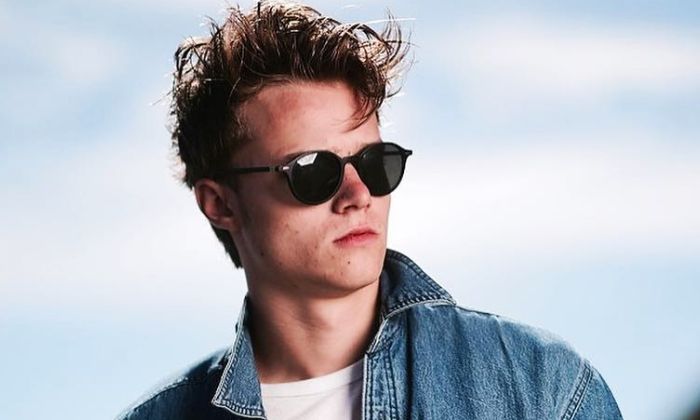 Rudy Pankow is an American actor who is perhaps best known for playing JJ, John B’s best friend, on Netflix’s hit teen drama, Outer Banks. The cool, funny, and coming-of-age drama has already garnered much attention among its viewers, thanks to the fresh talents and scenic locals of North Carolina. His notable acting credits include a minor part in The Politician and Freddy / Robert in Solve. Besides all this, Rudy has acted in short films such as Muse: Thought Contagion, Deviant, Last Summer, Not Me and Nobody Knows.

Rudy Pankow was born on the 12th of August 1998, in a small town in Alaska, United States of America. He is currently 23 years old.

There’s very limited to no information available about his early life or family or education. Having grown up in a small town in Alaska, Rudy attended Ketchikan High School, located in Ketchikan. His mother’s name is Penny Pankow, and apart from that, details about his parents and siblings are scarce at the moment.

Though he had no desire to become an actor initially, he moved to Los Angeles to spend some time with his family friends there. In fact, he was accepted into a culinary school, but he turned down it and went on to learn acting in LA. After a few acting classes, Rudy realizes that acting is his destiny and stayed there to pursue acting full time. At first, he booked small roles now and then before landing his first major break in Outer Banks.

Rudy Pankow has been in a relationship with his Outer Banks co-star Elaine Siemek since 2020. He made his relationship with Elaine public in later 2020 when he wished her on her birthday saying “You give me butterflies every day… literally. Happy Birthday PBM”.

Rudy Pankow kicked off his acting career with a small part in a short film titled “Sunny Family Cult” in 2017, where he played the role of Aaron. After a string of appearances in short movies, he landed a small role on an episode of Ryan Murphy’s Netflix series “The Politician” alongside Ben Platt. This was his first big break as an actor.

Not long after he was cast on Netflix’s “The Politician,” he secured a pivotal role in another Netflix series, Outer Banks, which is already a major hit on the streaming platform. He plays JJ, a surfer and best friends with John B, on the sensational hit teen drama, alongside Chase Stokes, Madelyn Cline, Madison Bailey, Jonathan Daviss, and Austin North.

At 23 years old, Rudy is already a successful actor and has gained immense popularity fairly recently. His net worth, as of 2023, is estimated to be around $1 million dollars.

The Alaska native is very popular on social media. His most recent accomplishment is that he has accrued 5.5 million Instagram followers since the premiere of Outer Banks. He’s not on Twitter and Facebook.

He grew up in a small town in Alaska.

Rudy is a certified Kayak Guide.

He can play four instruments: Drums, Guitar, Piano and Harmonica.

He loves to shower in the dark with candle light.

Rudy was a foreign exchange student in Japan.

He can be next seen in the movie called “Space Waves,” in which his character name is Joey Kite. The film is about two friends who become famous after their podcast goes viral.

He has won an air hockey tournament.

He can do a front flip.