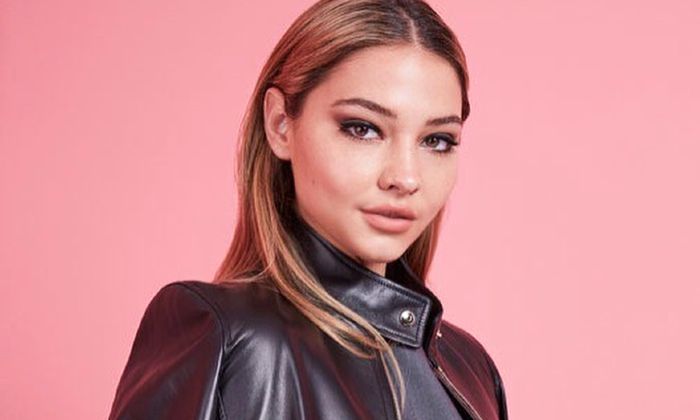 Madelyn Cline is an American actress, probably best known for playing the leading lady on Netflix’s hit teen drama, Outer Banks, in 2020. Before achieving great fame with her role as Sarah Cameron in the Netflix show Outer Banks, she played a small part on Stranger Things as Tina, one of the girls who checked out Billy when he has first introduced lifeguarding at the pool. Madelyn was also seen playing recurring roles as Taylor Watts on Vice Principals and Jessica on The CW drama series, The Originals. Her other acting roles include Chloe in Boy Erased and Taylor Watts in HBO’s Vice Principals.

Madelyn Cline was born on the 17th of December 1997 in Charleston, South Carolina, United States of America. She is currently 24 years old.

Madelyn Cline is the daughter of Mark and Pam Cline Her mother works as a water system engineer and a real estate agent, and they still live in her home state of South Carolina. She moved to LA against her parent’s wishes once she’d got enough money, but they now fully support her choice.

She attended Charleston Day School and Pinewood Preparatory School. In an interview, she stated that she went to college, which is Coastal Carolina University in Myrtle Beach, however, she dropped out of college because she found it difficult splitting her time between college and shoots. At that time, she was working on The Originals and Stranger Things.

Following her gut, Cline left college against her parents’ wishes and moved to Los Angeles, California to pursue acting full time. She has been in front of the camera for most of her life as she started modeling at the age of 10. She joggled between her hometown and New York to work in print commercials.

Apparently, the South Carolina beauty is private when it comes to her romantic life and keeps things away from the media to the best of her abilities. She was briefly linked up with her Outer Banks co-star Chase Stokes from June 2020 to October 2021.

Though her parents were against her when she decided to pursue acting, they now fully support her choice. She lives on her own tight since moving to Los Angeles, in the same apartment as her co-star Drew Starkey lives.

Madelyn Cline got her start at the age of 12 when she played the role of Matilda in the short film called Milites Christi. After a string of supporting roles, she landed the role of Willow in Randall Stevens’s comedy film, Savannah Sunrise, in 2016, starring alongside Shawnee Smith, Pamela Reed, Clare Carey, and Shawn Christian.

That same year, Cline played Grace Alexander in the TV movie, The Jury, before landing a recurring cast on Vice Principals.

Madelyn Cline has quickly achieved great fame and success following her role as Sarah Cameron on Netflix’s hit teen drama, Outer Banks. The show premiered on Netflix on April 15, 2020. She plays John B’s love interest and the daughter of the wealthy business owner, Ward Cameron. She is referred to by many as the princess of the Kooks, however, her rebellious side often rejects the Kook’s life and gets her mixed up with the Pogues. The breakout stars of the hit series are Chase Stokes, Madison Bailey, Jonathan Daviss, Rudy Pankow, and Austin North.

Madelyn Cline has already made her mark in the entertainment industry, thanks to the Netflix hit series, Outer Banks. With the increasing popularity of the show, she’s accruing a huge amount of social media followers. She can be found on Instagram and Twitter @madelyncline, where she has over 12 million and 96 thousand followers, respectively.

She forayed into show business at the young age of 10 when she appeared in television commercials and print ads.

Cline has featured in print advertising campaigns, including for T-Mobile, Next clothing, and also appeared on the cover of American Girl magazine.

She grew up in Goose Creek, South Carolina, a 20 minutes drive from Charleston, where Outer Banks was actually filmed.

She is a trained dancer and is learning how to play the guitar.