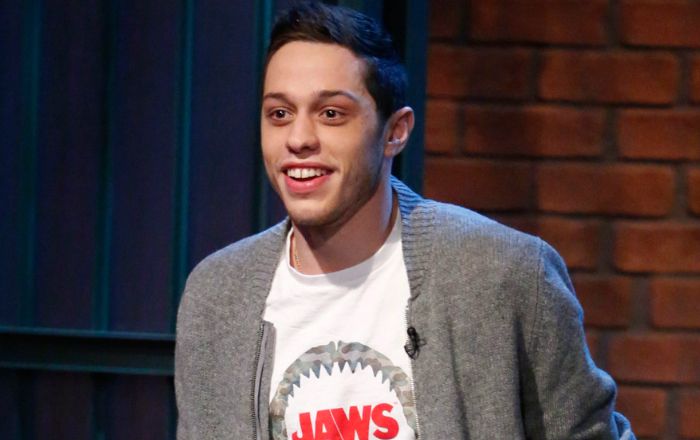 Pete Davidson is an American actor and comedian best known as the main cast member of Season 40 of the comedy show Saturday Night Live. He rose to fame as a stand-up comedian appearing in films and television. He has performed stand-up comedy on Jimmy Kimmel Live, Adam Devine’s House Party, and Comedy Underground with Dave Attell. Davidson has also appeared on the MTV shows Guy Code, Wild ‘n Out, and Failosophy. He has starred in films such as The Suicide Squad (2021), Bodies Bodies Bodies (2022), Meet Cute (2022), and Marmaduke (2022).

He has Jewish, German, Irish, Scottish, English, and Italian ancestry.

Pete Davidson attended St. Joseph’s School, then Tottenville High School before transferring to Xaverian High School in Brooklyn where graduated in 2011. He later enrolled at St. Francis College in Brooklyn Heights, remaining briefly before dropping out.

Davidson began a relationship with actress Phoebe Dynevor. The couple sparked romance rumors early this year after they were spotted together in Manchester. They broke up after a few months. He then dated reality star Kim Kardashian for nine months between 2021 and 2022.

He began dating singer Ariana Grande in May 2018. The couple got engaged in June 2018 and later broke up.

He was previously in relationships with fellow Girl Code comedian Carly Aquilino and dated comedian Larry David’s daughter Cazzie David from 2016 to 2018. Pete drew a lot of attention when he and actress Kate Beckinsale fueled romance rumors in early 2019. She was twenty years older than him and they both broke up after being an item for a while. He also dated actress Margaret Qualley and Kaia Gerber, daughter of supermodel Cindy Crawford.

Pete Davidson made his acting debut in the 2014 comedy-drama musical film School Dance, in which he played the role of stink finger.

Pete was cast in four episodes of season three of MTV2’s reality comedy series Guy Code as himself.

Being a prominent cast member on Saturday Night Live. At age 20, he was the first SNL cast member to be born in the 1990s, and one of the youngest cast members ever. His sketch comedy skits throughout the season have earned rave reviews from audiences.

He lost his father during the September 11, 2001, terrorist attacks as a firefighter, when he was 7 years old.

Davidson revealed on The Breakfast Club morning radio show that he often thought of suicide when he was younger and that listening to rap artist Kid Cudi music helped him to give up his thoughts.

At 17, Pete was discovered by Nick Cannon, and eventually, that was the starting point in his comic career.

He was diagnosed with Crohn’s disease at age 17 or 18 and he started smoking weed to get rid of the unbearable pain.

On March 6, 2017, Davidson announced on his Instagram account that he had quit drugs and was sober for the first time in eight years.

He has his father’s badge number, 8418, tattooed on his left arm.