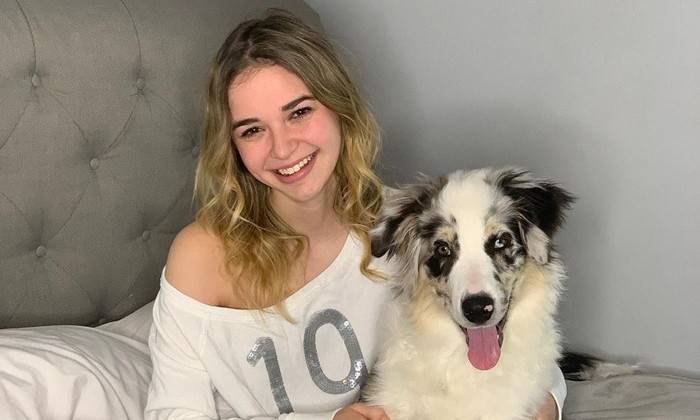 Nikki Roumel is a young talented and beautiful actress from Toronto, Ontario, who came to prominence for playing the the teenage version of Georgia Miller in the hit Netflix series, Ginny & Georgia. Her other notable acting credits include Sibyl Sadik in Designated Survivor, Amber in Paranormal Witness, and Cheer Captain in Holly Hobbie.

Even though Nikki hasn’t shared anything about her family or her early life, it is known that she’s the youngest child to her parents whose identities have not been revealed yet. She grew up alongside her older sister Talia Roumeliotis in her hometown of Guelph in Ontario.

She completed her schooling at John F. Ross Collegiate Vocational Institute, a public school in Guelph, Ontario. She later got accepted into the Wilfrid Laurier University, where she studied acting.

From an early age, she knew that she’s destined for a career in acting, and at age 12, she got herself an agent and at age 13, she took up her first acting job in the short film Anaphylaction.

The young cutie is very secretive when it comes to her romantic aspect of life. She rarely talks about her love life, though, it seems like she has not found her man yet. From her social life, you can bet that she is not likely looking for a relationship, and it may be due to the fact that she just entered the world of acting and doesn’t want to catch up in.

You probably know Nikki Roumel for her portrayal of younger version of Georgia Miller in the hit Netflix show, Ginny & Georgia, but she has already acted in few TV shows. She made her acting debut in 2015, playing Amber in the documentary series Paranormal Witness and has been working hard ever since to forge a place for herself in the acting scene.

The young beautiful actress has been in the spotlight for a while, thanks to Netflix’s Ginny & Georgia. On the show, she played the teenage version of the titular character, co-starring alongside Brianne Howey, Antonia Gentry, Jennifer Robertson, Felix Mallard, and Sara Waisglass.

With her being roped in major projects, the actress is only reaching new heights, and you can bet that she’ll be making a lot more money for each role she takes in.

Given the fact that she has just entered the world of acting, there’s not a lot to share regarding her net worth right now, , Of course, with all of these big roles, there comes a heft paycheck. There’s no doubt in it.

She is a competitive kickboxer.