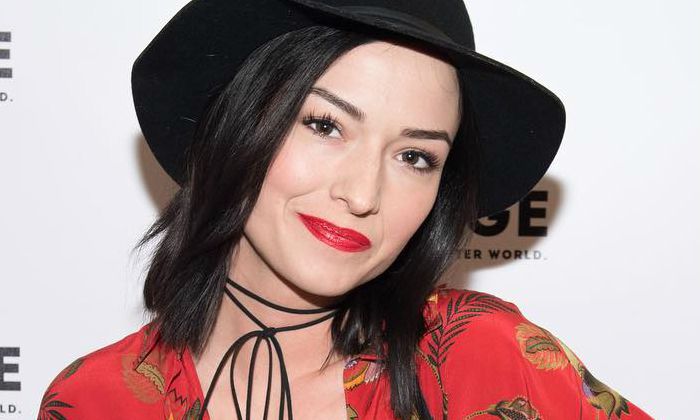 Natasha Negovanlis is a Canadian actress who gained notoriety for her role as Carmilla Karnstein in the web series Carmilla as well as in the feature film based on the same series. She played supporting roles in several projects at the very beginning of her career and later landed prominent roles in Almost Adults, Freelancers Anonymous, CLAIREvoyant and Haunted or Hoax. She was awarded the Fan’s Choice Award at the 2017 Canadian Screen Awards. Natasha won the Best Ensemble Performance at the 2018 Toronto Web Fest Awards for her performance in the web series called Haunters: The Musical.

Natasha Negovanlis was born on the 3rd of April 1990, in Toronto, Ontario, Canada. She is currently 31 years old.

There’s not much is known about her immediate family or her early life. Her father is Macedonian and Greek descent while her mother has Irish and Indigenous ancestry.

Natasha discovered her passion for performing arts at a young age and joined the Wexford Collegiate School for the Arts in the Scarborough district of Toronto to study musical theatre and film.

She then attended the Schulich School of Music at McGill University in Montreal, Quebec where she majored in voice performance. During her time at the acting school, she was a member of the Montréal Improv Theatre where she performed improv and sketch comedy.

Talking about Natasha’s romantic life, she identifies herself as bisexual and has had romantic relationships with both men and women.

Natasha Negovanlis had starred in more than a dozen musicals before starting her career in film and television. She made her feature film debut in Sarah Rotella’s comedy film, Almost Adults, in which she played the role of Cassie.

The film, which chronicled the platonic love story of two life long best friends struggling to keep their friendship together as their lives head in different directions, hit the theatres in the year 2016. It won IndieWire’s Project Of The Year in 2015 and was screened at several film festivals around the world.

In 2014, Natasha was cast in the titular role as Mircalla “Carmilla” Karnstein in the web series, Carmilla. The series was co-created by Jordan Hall, Steph Ouaknine, and Jay Bennett which is based on the novella of the same name by Sheridan Le Fanu. She co-starred with Elise Bauman in the series which had its run for three seasons from 2014 to 2016.

Concerning her net worth, several online sources have claimed Natasha Negovanlis to be worth around $500 thousand dollars.

Just like other popular faces in the industry, Natasha Negovanlis has a massive following across social media platforms. She uses it to connect with her fans as well as to promote her upcoming projects she’s working on.

She was raised in Toronto, Ontario, Canada.

She is a trained classical singer.

Natasha was included in AfterEllen.com’s “Hot 100” list of sexiest women in 2015, along with the likes of Ruby Rose and Shay Mitchell.

She toured across North America with The Bach Children’s Chorus before pursuing acting.

She has an adopted rescue dog named Charlie Bucket.

She is a huge supporter of the LGBTQ community.

She took piano lessons when she was young and performed in several community theatre productions while in high school.