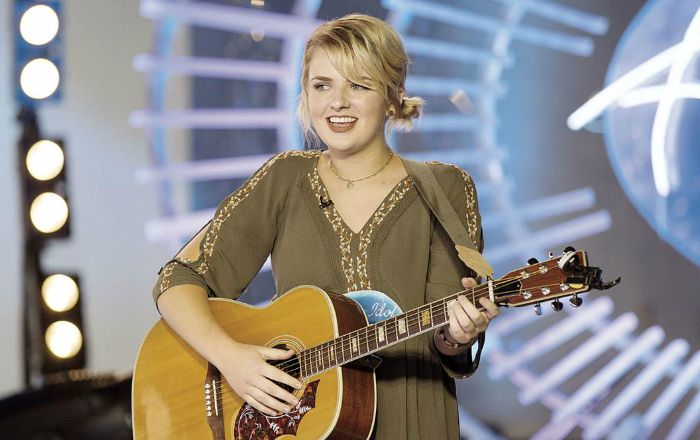 Maddie Poppe is an American singer and songwriter. She gained a lot of attention for her performance of “The Rainbow Connection” from The Muppet Movie on ABC’s renewed version of American Idol. She has previously auditioned for The Voice back in 2016, but she couldn’t make it to the show. Maddie won season 16 of American Idol.

Maddie Poppe is the daughter of singer and musician Trent Poppe and Tonya Poppe. She has a sister named Hannah Poppe.

She attended and graduated from Clarksville High School in 2016. Poppe got herself enrolled at Iowa Central Community College in 2016 to study graphic design but she later switched to Hawkeye Community College to study digital mass media.

The blond beauty has been dating his fellow contestant Caleb Lee Hutchinson since they met on the sets of the show. They revealed that they fall in love with each other behind the scenes and finished the show as a couple.

Maddie Poppe released her debut EP titled “Songs From The Basement”  in June 2016 on iTunes, which she wrote, recorded and produced.

She released a music video for the song “I Like You” in December 2016. She released the single “Going Going Gone” and “Keep On Movin On’ in 2018.

Maddie released her first full-length album, Whirlwind, on May 17, 2019. The album’s lead single “Made You Miss” peaked at No. 21 on the US Adult Pop Songs chart.

She hasn’t been cast in any feature film to date.

As of 2023, Maddie Poppe has an estimated net worth of $500 thousand dollars.

She began singing at a young age and was a huge fan of American Idol. She got acquainted by looking at the contestants gaining popularity and fame through the show.

Her father is a musician himself inspired her to make a career in singing.

She has been performing at local shows and events before her audition for American Idol.

Maddie impressed the judges when she performed “The Bare Necessities” from Disney’s The Jungle Book at “Disney Night” and made it to the top 7 on April 29th.

In the finale of American Idol, Maddie performed “Landslide”, her original song “Don’t Ever Let Your Children Grow Up, and eventually declared the winner, with Caleb Lee Hutchinson as first runner-up and Gabby Barrett, as second runner-up.

The Governor of Iowa, Kim Reynolds has declared May 20 as “Maddie Poppe Day” in Iowa.

In 2018, she won the People’s Choice Award for Competition Contestant 2018.

On May 28, 2022, she was a surprise celebrity guest on The Masked Singer Tour, in Omaha, Nebraska.