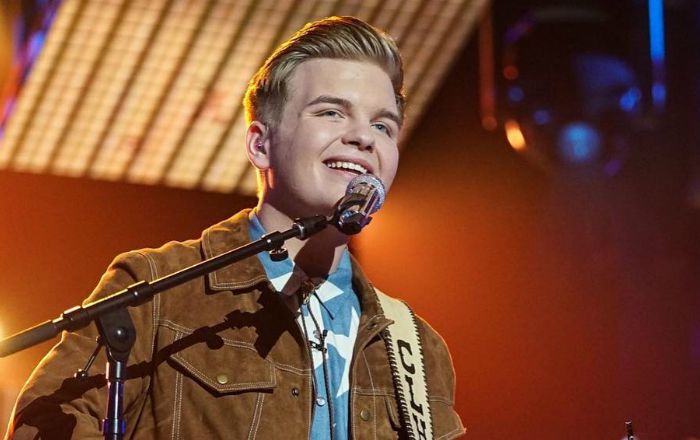 Caleb Lee Hutchinson is an American pop singer and dancer who gained visibility after appearing as a contestant on American Idol Season 16 on ABC. The Georgia native is one of the amazingly talented singers on the show. He has been voted to the final three on the reality show and has earned a lot of fans since he first appeared on the show. He dropped his EP titled “Country Music” in 2016 and won the Georgia Country Teen Showcase in 2017.

Caleb is the oldest son of William, a construction worker, and Piper Hutchinson. He has a brother named Tyler Hutchinson, who works in the US Navy.

Caleb Lee Hutchinson has been dating his fellow contestant and the winner of the American Idol Season 16 Maddie Poppe since they met on the sets of the show. They revealed that they fell in love with each other behind the scenes and are now a couple during the finale.

He made his first television appearance in Season 9 of The Voice where he performed “The Dance” in the blind auditions. But, he was apparently not selected in the process.

His appearance in the 16th season of American Idol.

His net worth is currently unavailable.

Caleb Lee is fascinated with country music at a very young age.

He is a good dancer too. He won the Georgia Country Teen Dance Show in 2017.

He stunned the judges during the top 21 solo performances when he revealed that he shed around 70 lbs since his first appearance on the show.

When host Ryan Seacrest asked Caleb how he lost the weight, Caleb said, “One day I was like, ‘Hey, wouldn’t it be cool if I drank water and walked every night.’” Caleb also added, “The more the Instagram likes went up, the more I wanted to hit the treadmill.”

He refers to his fans as Hutchpuppies.

He released a self-titled EP on 28 June 2019, featuring hit singles “Left of Me” and a cover of Post Malone‘s song “Better Now”