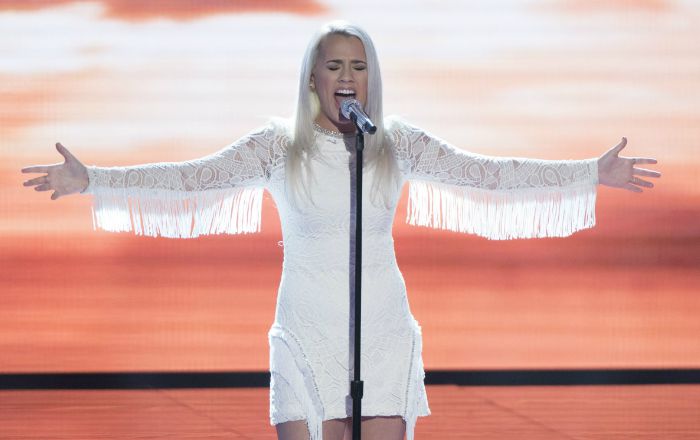 Gabby Barrett is an American country pop artist who earned a lot of fame back in 2014 when she won the Kean Quest Talent Search. She was then regarded as “A voice you must hear” by The Pittsburgh Tribune-Review. She has just turned 18, and at this young age, this gorgeous blonde beauty is no stranger to the music world and to the people of Pittsburgh at least, as she has performed in more than 100 shows. She hit the headlines again in 2018 for finishing third on ABC’s revival singing reality show, American Idol.

Gabby Barrett was born on the 5th of March 2000, in Pittsburgh, Pennsylvania, United States. She is currently 22 years old.

Gabby Barrett’s father’s name is Blaise Barrett. Her mother’s name is unknown. She’s one of the eight children to her parents and has three sisters and four brothers – Demi, Blasé, Emily, Philip, Elijah, Gabriel, and Gypsy Barrett.

She attended Serra Catholic School, a private college preparatory in McKeesport, Pennsylvania. She left high school as a result of bullying and later enrolled online.

Gabby Barrett married singer Cade Foehner on October 5, 2019, at Union Springs in Garrison, Texas, U.S. They began dating after falling in love with each other during their run on the 16th season of American Idol and became engaged in March 2019. She gave birth to her daughter, Baylah May, on January 18, 2021.

Gabby Barrett dropped her debut album Goldmine on June 19, 2020. The album peaked at number 27 on the US Billboard 200 and featured multi-platinum singles “I Hope” and “The Good Ones”, both topped the US Country Songs and Country Airplay charts.

Gabby Barrett made her TV appearance on the singing reality show American Idol in 2018.

Known for her appearance on the reality show American Idol.

She has been singing since she was 9 years old. Her father insisted she pursue a career in singing because of her natural singing talent.

She joined the Homestead’s Lamb of God Christian Ministries at the age of 14 where she was the youngest member of the choir.

She has posted covers of popular artists on her YouTube channels such as Ariana Grande, Miranda Lambert, Aretha Franklin, Mariah Carey, Tim McGraw, Faith Hill, and Prince in the past.

She is an R&B singer at the start of her career but later transitioned to country pop, influenced by Carrie Underwood and Miranda Lambert.

Gabby has performed in venues such as Heinz Field, PNC Field, and Hard Rock Cafés all over the country.

In 2014, she won the local Kean Quest Talent Search with her rendition of “Mercy.”

She won the Smokey Robinson Motown Award as well as the Jackie Evancho Award.

She has dropped a lot of tracks both covers and originals since she turned pro and has released around 12 singles in 2017 alone.

She is best known for her original singles “Your Name on It” and   “Something Good.”

Gabby Barrett has done a lot of charity shows in and around Pittsburgh, including the Children’s Hospital in Pittsburgh and the Ronald McDonald House.

Her recent music video “Young Blood” has been viewed over 100,000 times on YouTube.