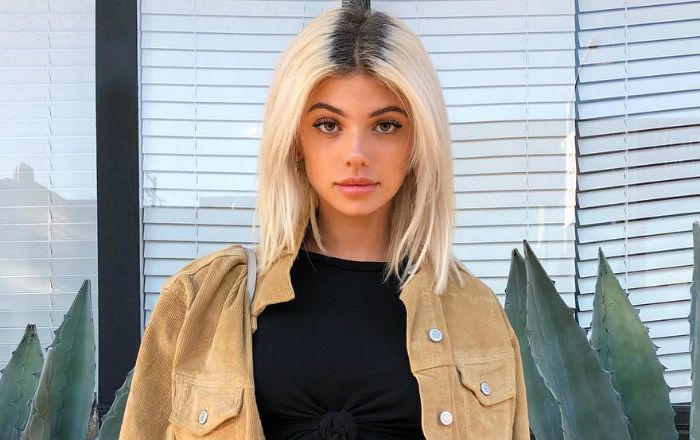 Kelsey Calemine is a famous star for posting pictures of herself to her Instagram account ‘‘, which has earned more than 3 million fans. Her look like reality TV star Kylie Jenner and actress Lucy Hale helped her gain lots of fame and even got noticed by the latter who shared a picture of Kelsey on her Instagram wall.

She asked her followers to confirm whether the person was real or the picture was morphed digitally, which made her popular overnight. Lots of online websites started talking about Kelsey and the similarities between her and Lucy. Around that time, she was declared as ‘Instagram babe of the week’ by Galore magazine.

Unfortunately, there isn’t too much information about Kelsey’s early family life as of yet, including the identities of her parents. She was raised with her stepbrother, whose name is not known in her hometown of Los Angeles, California.

Likewise, details about her academic qualification are unknown either.

Kelsey Calemine is dating fellow Instagram star, Ryland Lynch. She was previously in a relationship with Asher Brown.

Undoubtedly, Kelsey is extremely popular as an Instagram star and has more than 3 million followers on her Fatherkels account. One more reason that she quickly landed in the spotlight is her striking resemblance to celebrities like Lucy Hale and Kylie Jenner.

Kelsey is a close friend of actress and singer Madison Beer.

In 2016, actress Lucy Hale posted a picture of Kelsey on her Instagram with a caption that reads “What. Is this a real person or morphing?” that brought instant popularity to this gorgeous damsel who is quite enjoying social media fame.

The young beautiful starlet has an amazing smile because she had braces when she was 13 years old.

She often changes her hairstyle as well as dyes it with different colors.

She has a pet dog named Mochi and 2 ducks.