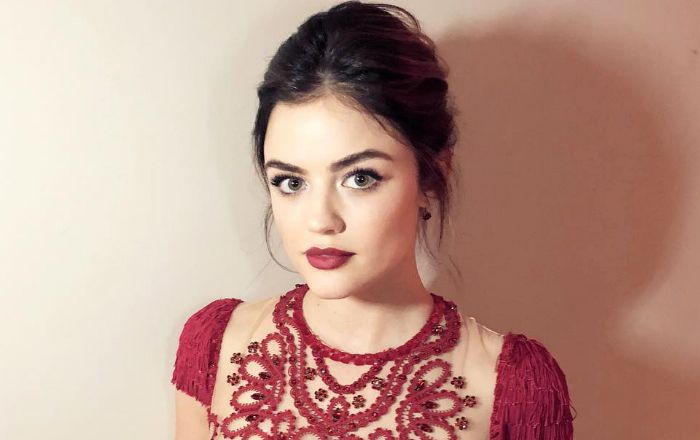 American actress and singer Lucy Hale is best known for her role as Aria Montgomery on the Freeform series Pretty Little Liars. She won the  People’s Choice Award for Favorite Cable TV Actress in 2014.

She first gained fame at her adolescent age when she made it to the top five on the reality show American Juniors, a children’s spin-off of American Idol. The gorgeous actress with a melodious voice helped her to establish herself as a country singer by releasing her first album ‘Road Between’ in 2014.

Lucy went to Cordova Optional School in Memphis. She then moved to Los Angeles and was home-schooled therein.

Lucy Hale’s personal life has often attracted media attention due to her fair share of affairs and ever-changing relationship status. She has dated over a dozen men as of 2023. Lucy is currently in a relationship with actor Skeet Ulrich.

In 2008, Lucy Hale made her onscreen debut with the film, The Sisterhood of the Traveling Pants 2, portraying Effie Kaligaris.

Her first television appearance came in 2003 when she participated in a singing reality show, American Juniors. She has since appeared in a number of TV shows and series.

She has been singing since she was a child. In 2012, she was signed by Hollywood Records and on January 7, 2014, Hale released her debut single ‘You Sound Good to Me’. On June 3, 2014, she released her debut studio album “Road Between” which peaked at no 4 in the US Country chart.

Known for her starring role as Aria Montgomery on the ABC Family series Pretty Little Liars, which earned her lots of fame and accolades.

She has endorsed brands like Bongo. In June 2013, Hale was made the Brand Ambassador for the beauty brand Mark Girl.

Her estimated net worth stands at $6 million US dollars as of 2023. The majority of her earnings come from film and TV appearances and brand endorsements. She owns a $1.7 million luxurious home in Studio City, California which spans over 3,600 square feet and has four bedrooms along with 3.5 bathrooms.

Growing up, she took acting and singing lessons.

Lucy moved to Los Angles when she was 15 to try her luck in singing and acting. She did auditions for acting with several productions and did minor roles on television shows.

She has been cast in a number of TV shows like How I Met Your Mother, Bionic Woman, Privileged, CSI: Miami, Pretty Little Liars, and Baby Daddy.

She has won several awards for her role in Pretty Little Liars including Teen Choice Awards and People Choice Awards in various categories.

In August 2012, Hale revealed she had suffered from an eating disorder.

Lucy Hale will be playing a lead role in the American comedy-drama series, Life Sentence, that will debut on The CW on March 7, 2018.