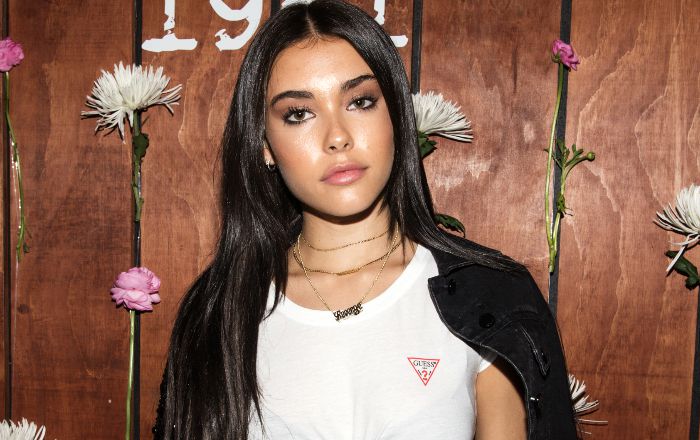 Madison Beer is a rising American pop singer and actress who came to the limelight after pop star Justin Bieber tweeted a link to her cover of Etta James’ “At Last”. She released her single “Dead” in May 2017, followed by her debut EP “As She Pleases” on February 2, 2018, to fans’ overwhelming response. Her debut album Life Support was released on February 26, 2021, on Epic Records. Far more than just a singer, Madison has proved that she’s multi-talented with her appearances in Louder Than Words (2013), Todrick (2015), and Drag Race (2020).

Madison is the oldest daughter of a builder father Robert Beer and Tracie Beer, who is an interior designer. She has a younger brother named Ryder Beer. Her family belongs to Jewish ancestry. She had a rough childhood because her parents divorced when she was young, Beer had her Bat Mitzvah ceremony in 2012.

Being a social media star, Madison is usually vocal about her romantic life. She shares a lot of personal happenings with her fans on social media. Though she had been linked up with many men down the line of her love life, her relationship with American social media personality Jack Gilinsky was quite famous.

They dated for over a year in 2015 and called it quits in 2016 and renewed it in 2016 before ending it finally in 2017. Madison made the call after an audiotape of Jack verbally abusing her surfaced on the internet, which is no longer available.

In the recording, he called her an “f–king slut” after she cracked a joke about his music being “sh-”. Her angry fans lashed her for keeping quiet about the tape, to which she responded, she remained silent because she hoped to change his behavior. Down the line, she gave up and revealed that she broke up with him as she could not change him.

Madison then dated Brooklyn Beckham, the son of David Beckham and Victoria Beckham in 2017. The duo ended their relationship in August 2017. During this period, her fans speculated that she might be dating Instagram star Claudia Tihan after a video of her kissing Claudia went viral on the internet.

She began dating Instagram star Zack Bia in 2017. They remained friends for a few months before she confirmed their dating affair in late 2017. They broke up in 2019.

She is currently in a relationship with an American TikTok star and social media influencer called Nick Austin.

Madison is presumably bisexual but she doesn’t want her to be categorized straight. During an interview, Beer stated, “I’m not a lesbian but I definitely love girls I think girls are the most amazing thing to happen to planet earth. I wouldn’t categorize myself as straight.”

Madison Beer released her debut single “Melodies” on September 12, 2013. An accompanying music video was released the same month, which featured a guest appearance by Justin Bieber.

She released her second lead single “Unbreakable” from her debut album on June 17, 2014.

Madison landed her first starring role as Amy in the 2013 family drama film Louder Than Words.

In 2014, she guest appeared on the talk show Piper’s Picks TV as herself.

She acquired worldwide fame for her cover of the song ‘At Last’ by Etta Jones. This video was posted by Bieber to his Twitter, where he had over 25 million followers at that time.

Her singles “Melodies” and “Unbreakable” and her EP “As She Pleases”.

Madison has a net worth of $16 million, as of 2022. This money comes from her music sales, tours, public appearances, endorsements as well as monetizing her popularity on social media. In 2020, Madison purchased a farmhouse mansion in Encino, California, for $5.6 million.

Beer gained early popularity and success after Justin Bieber tweeted a link to a video of her singing.

She was then signed to Island Def Jam Records by Justin Bieber.

She runs a self-titled YouTube channel, on which she posts covers and original music videos, makeup tutorials, romantic videos with her boyfriend, and other videos about her life across her social media.

Madison appeared in a music video for the song, ‘I Won’t Let You Walk Away’ with DJ Mako, which peaked at #33 on the US Billboard Hot Dance/ Electric Songs.

She is working on her debut album which she said would have an R&B pop vibe, stating there “will be slow songs, sad songs, happy songs, songs about boys, and songs about being who you are.”

She has a huge fan following on Instagram with over 31 million subscribers.

As she continued to gain popularity, a lot of rumors also started to spread. One such rumor is that she was accused of being fake. She, however, denied those claims saying that she has neither used photoshop nor had undergone plastic surgery.