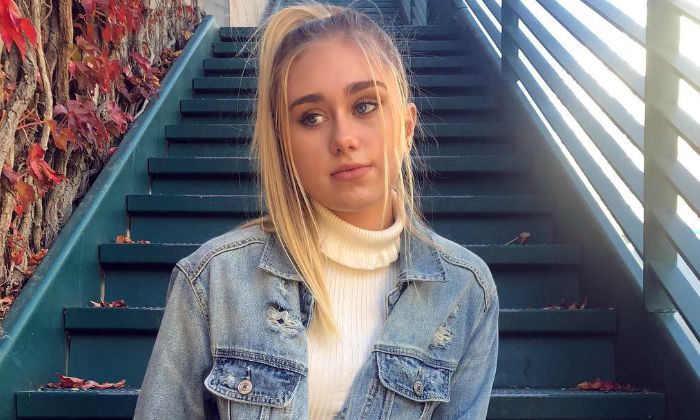 Who is Emily Skinner?

Emily Skinner is an American actress and dancer probably best known for her portrayal of Amber on the Disney Channel series Andi Mack. She started out as a child actress at the age of 7 with guest appearances on TV shows such as Numbers, CSI, Shake It Up, Days of Our Lives, Austin and Ally, The Mindy Project, Sam and Cat, Criminal Minds and Rizzoli & Isles. In 2018, she joined the cast of the teen/tween drama web series Total Eclipse as Diana along with the likes of Mackenzie Ziegler, Johnny Orlando, and Lauren Orlando. Her film credits include minor roles in Blood Ransom and The Lies I Tell Myself; as well as a starring role in her first full-length feature film, Next Level.

Emily Skinner was born on the 30th of November 2002, in Mission Viejo, California, United States of America. She is currently 18 years old.

Emily Skinner is the youngest of two children to Jennifer and Steve Skinner. she has an older sister, Lauren Skinner, with whom she took dance lessons at Dance Dynamics.

The acting bug caught her when she was a child that made her parents enroll her in a community acting class. Impressed by her exceptional acting skills, her teacher put her in touch with an agent in Los Angeles, who introduced her to the acting world. She and her sister, Lauren, studied dance at Dance Dynamics, a dance studio in California.

Since Emily ventured into acting at a young age, she couldn’t attend regular schools and enrolled in the homeschooling program.

It appears that Emily Skinner is enjoying her teenage life and isn’t ready for a relationship. She is still single and seems very cautious about her private life being exposed to the media. There are not many known details about her love life on the web.

Emily landed her first television role at just six years old on an episode of the crime drama TV series, Numb3rs, in 2009.

She got her first major breakthrough in 2017 when she joined the Disney family comedy TV series, Andi Mack. She was cast in a recurring role of Amber in the hit drama series. The series stars Peyton Elizabeth Lee, Joshua Rush, Sofia Wylie, Asher Angel, Lilan Bowden, Lauren Tom, and Trent Garrett.

Emily’s performance as Diana in the teen drama web series, Total Eclipse, was well received by her fans that eventually brought in her plenty of fame.

According to various sources, Emily Skinner has an estimated net worth of $1.3 million.

She developed an interest in acting at a young age and used to pretend herself as an actor and perform plays.

At that age, she expressed her love for acting to her mom, who then put her in an acting class to hone her acting skills.

She has starred in a bunch of short films, including Jessica Biel’s Sodales, which was a part of Glamour Magazine’s “Reel Moments”.

When not acting, Emily enjoys hiking, snowboarding, and hanging out at the beach with friends.

In 2013, she appeared in the music video for “Broken Arrows”, an Avicii song.

She has a dog named Molly.

She resides in Orange County, CA with her family.

Emily has a strong social presence with more than 2 million people following her on her Instagram page.