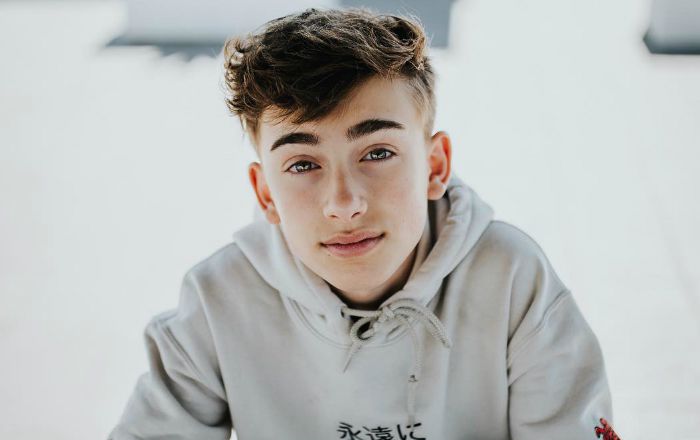 Johnny Orlando is a famous Canadian singer, actor, and internet personality. His love for music fueled him to start a YouTube channel, ‘Johnny Orlando’ at the age of eight, on which he posted covers of pop songs by artists such as Austin Mahone and Justin Bieber. Soon, he started gaining fans worldwide that motivated him to post original songs such as ‘Replay’, ‘Summertime’, ‘Never Give Up’ and ‘Found My Girl’ to his YouTube channel, which has over 3.2 million subscribers as of June 2018. In 2016, he released his single, ‘Let Go’, which has attracted more than 13 million views.

Johnny Orlando is the third of four children of Meredith and Dale Orlando. His father is a lawyer and former President of the Ontario Trial Lawyers Association. Both his parents are also social media personalities. He has three sisters, Darian Orlando, Lauren Orlando, and Maddie Orlando.

He’s still believed to be single. But, he was linked to actors Mackenzie Ziegler and Nadia Turner in the past. However, representatives of both stars have denied the linkups.

Johnny Orlando was cast in the 2016 mini-series Neighbourhood Eats. in 2017, he made his feature film debut, lending his voice to the character called Travis in the animation movie, Bunyan and Babe.

In 2018, he landed the role of Sam in the web series called Total Eclipse.

His popularity has grown unprecedentedly since the release of his original single, ‘Let Go’. It has garnered more than 13 million views on YouTube.

His popularity can be attributed to his strong presence on different social media, including YouTube where he has more than 4.2 million subscribers and more than 6.2 million followers on Instagram.

His net worth is estimated to be $1.5 million dollars. The majority of his net worth comes from YouTube ad revenue, public appearances, and music.

He started his music career at the age of 6 by singing in school musicals.

By 8, he started creating music videos along with his sister Darian, who was then 13.

He created his self-titled YouTune channel in December 2011 and started posting covers of popular pop stars like Rihanna, Justin Bieber, and Austin Mahone.

In 2016, he toured with MAGCON across the United States. That same year, he released his single ‘Let Go’, which went on to become an instant hit, charting on iTunes chart.

He starred as Bully in the short film, Fading light.

As a voice actor, he has lent his voice to the characters Oliver and a minicab driver in TV series Wishenproof and Spaced. Bur his roles were uncredited.

He made it to the cover of the March/April 2018 issue of TigerBeat magazine.

In 2019, he won the MTV Europe Music Award for Best Canadian Act.