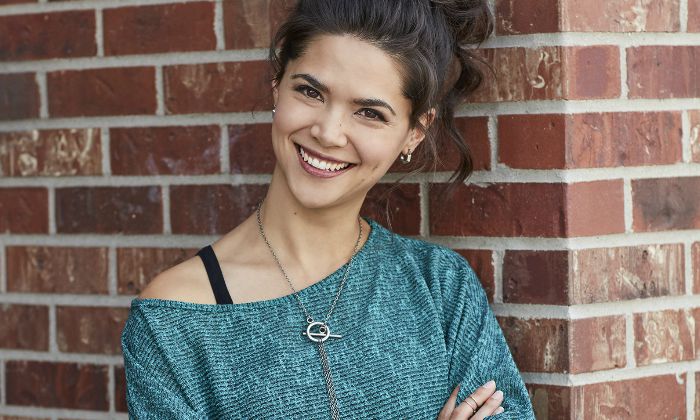 American actress Lilan Bowden who is probably known for her portrayal of Rebecca “Bex” Mack in the Disney comedy-drama series Andi Mack. She was a member of the sketch-comedy group Upright Citizens Brigade. She has played small roles in several other TV shows including “The Pete Holmes Show,” “Parks and Recreation,” and “Suburgatory,” to name a few. Apart from versatile TV roles, Lilan has starred in a string of short films.

Lilan Bowden was born on the 1st of September 1985, in Castro Valley, California, United States of America. She is currently 36 years old.

Speaking about her family, Lilan Bowden is the daughter of an American father, Ivor Bowden, and a Taiwanese mother, Shiou (Chen). She has a younger brother named Jason Bowden.

Bowden graduated from Castro Valley High School in Castro Valley, California in 2002, where she was a member of the school’s comedy clubs and improv. She then went on to study theatre at the University of California in Irvine. After her graduation in 2006, she moved to Los Angeles and joined the improvisational and sketch comedy group called Upright Citizens Brigade.

Lilan Bowden is possibly single as there are no reports of her being in a relationship presently or in the past. Apparently, she is very reluctant to discuss her love life.

Talking about her acting career, Lilan Bowden landed her first role in the drama movie “Sex and the USA” as Risa Reagan in 2008. The film was premiered at Deauville Film Festival on September 12, 2008.

Bowden launched her television career in 2007, playing the role of Jane in four episodes of the series “Gullible Gil.”

Bowden got the major breakthrough as an actress when she was cast as Rebecca “Bex” Mack in the Disney family comedy-drama television series, “Andi Mack.” She portrays the mother of protagonist Andi on the show alongside the likes of Peyton Elizabeth Lee, Joshua Rush, Sofia Wylie, and Asher Angel.

She is known for her guest roles in television series such as “Hart of Dixie,” “Suburgatory,” “Parks and Recreation,” and “Adam Ruins.”

According to authoritative sources, Bowden’s net worth is estimated to be $1.5 million.

Her first name is pronounced as LEE-lon.

She began her career as a comedian with the sketch comedy group “Upright Citizens Brigade” with whom she has appeared on a good number of comedy shows.

In addition to being an actress and comedian, Bowden is also a writer and worked as a writer for various shows and short films, including “Lilan and Wilder Get Up Early,” “Life After LOST: Ethan Adopts,” and “Normal Best Friends Say Bye.”

In 2019, she starred in an episode of the web series, Future Man.

She enjoys playing basketball and skateboarding.

Lilan Bowden has revealed that she struggled to bag goods roles during her early days in the industry due to her Asian–American heritage.