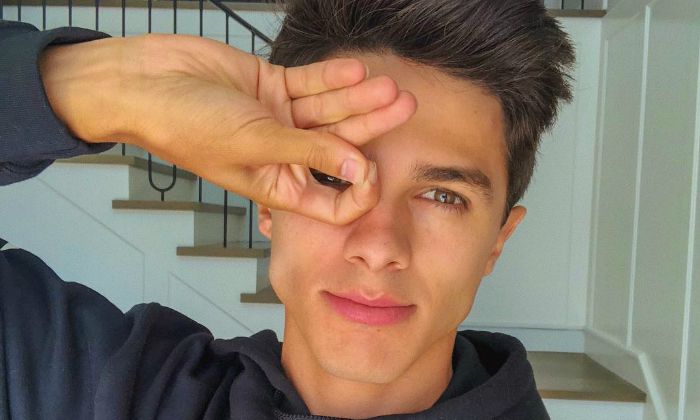 There are a lot of young social influencers out there who have turned their impeccable talents into a career as internet celebrities. Brent Rivera is one such influencer from Huntington Beach, California, who is probably best known as a Youtuber and actor. Known for his YouTube channel “MrBrent98”, this budding lad has managed to grab the attention of the internet audience with already over 15 million people subscribed to his channel.

Brent Rivera was born on the 9th of January 1998, in Huntington Beach, California, United States of America. He is currently 24 years old.

Speaking about his personal life, very little is known about his family and his childhood. Despite being a prominent internet celebrity, Brent has kept things away from the spotlight in all his capacities. It appears that his mother, Laura Rivera, has raised him and his siblings, Brice, Blake, and Lexi Rivera, who is also a social media personality. He is Caucasian-white by ethnicity.

Likewise, details about his educational background are also unknown. But what we can say about his early life is that he has always been an entertainer right from childhood and loves entertaining people around him. And that apparently led to where he is today.

It’s no surprise why girls go crazy for him, thanks to his killer looks and masculine features. His fans, especially girls, are always keen to know about his love life.

He is currently in a relationship with social media influencer Pierson Wodzynski.

He was in a relationship with fellow social media celebrity Eva Gutowski for over a year. According to sources, the two began dating as early as 2019, however, they have been friends since 2016. Interestingly, neither of them has confirmed nor refuted to be in a relationship yet. Thye broke up in the summer of 2020

Previously, Brent’s fans speculated him to be dating fellow social media star, Lexi Hansler. Nevertheless, when the news about their alleged relationship spread like a wildfire, Lexi was the first to clear the air stating that she’s not dating him.

Brent was also reported to have dated California-based model and singer Morgan in the past.

Rivera has not been in the online game until when he launched his YouTube channel in 2009. He posted his first video in 2013. During this time, he also joined the now-defunct Vine, a short video uploading app along the lines of TikTok and Musical.ly.

Not long before joining the app, he managed to gain tens of thousands of fans. Over time, he was able to lure over 8 million people to follow him and became one of the most followed Viner on the app.

By combing his creativity and his passion to entertain others, Brent has become someone that everyone admires. His YouTube channel “MeBrent98” has an insanely large following with over 10 million subscribers. He is more popular than many of his peers.

In November 2014, Brent released his debut single “Doubt Your Doubts” on iTunes, eventually bringing in a lot of followers to his social media accounts.

He has also starred in a few movies, making his debut in the comedy film called Alexander IRL in 20017 and went on to portray Issac Salcedo in the 2018 supernatural web television Light as a Feather. He was also seen in the movie Brobot (2018).

Over the years of his successful online career, Brent has managed to earn a handsome amount of money from different revenue streams. Brent Rivera’s net worth is estimated to be a hefty $4 million.

He launched his online career in 2009 by joining the most popular video uploading platform, YouTube.

He has done a lot of collaborative videos with other social media stars including Cameron Dallas, Nash Grier, Lilly Singh, Shawn Mendes, Chris Collins, and Chloe Lukasiak among others.

Brent was named the “Best Dressed” at the 2015 MTV Music Awards.

He is a vegan.

He has a dog named Becker.

His celebrity crush is Selena Gomez.

Surprisingly, he is allergic to peanut butter.