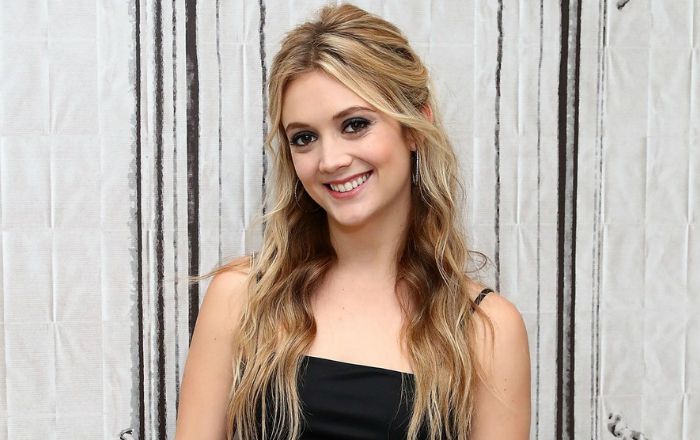 Billie Lourd is an American actress who became known for her role as Sadie Swenson in the Fox horror-comedy series ‘Scream Queens’. She had her part in the FX horror anthology series ‘American Horror Story’ playing different characters and went on to play Lieutenant Connix in the ‘Star Wars’ sequel trilogy.

Billie Lourd was born on the 17th of July 1992, in Los Angeles, California, United States of America. She is currently 29 years old.

Bille comes from a family of actors. Her mother, Carrie Fisher, was a popular actress of her time, who died on December 27, 2016, due to cardiac arrest. Her father, Bryan Lourd, was a talent agent. Her grandparents are actress Debbie Reynolds and singer Eddie Fisher, and she is the niece of Todd Fisher, Joely Fisher, and Tricia Leigh Fisher.

She has a half-sister, Ava, from her father’s previous marriage. Billie has Italian, Welsh, German-Jewish, Russian-Jewish, Scots-Irish, and English ancestry.

Actress Meryl Streep is her godmother while Writer Bruce Wagner is her godfather.

She graduated from New York University in 2014 with a double majoring in religion and psychology.

Billie Lourd is having an on-and-off relationship with actor Austen Rydell since 2016. The pair got engaged in June 2020 and she gave birth to their first child, a boy, Kingston Fisher Lourd Rydell, in September 2020.

Previously, she dated actor Taylor Lautner for over 8 months between 2016 and 2017.

Billie Lourd made her feature film debut as Lieutenant Connix in the space drama film ‘Star Wars: The Force Awakens’ in 2015. She reprised her role as Connix in its sequels Star Wars: The Last Jedi and Star Wars: Episode IX, in 2017 and 2019, respectively.

Unlike other actors, who would end up with supporting roles in their early career, Lourd bagged some significant roles in both films and TV shows. Her portrayal of Lieutenant Connix in Star Wars: The Force Awakens earned her a lot of fame and not long after this role, she landed a pivotal role in the Fox comedy horror series ‘Scream Queens’ in 2015.

As of 2023, Billie Lourd has accumulated a net worth of $20 million, most of which coming from her successful acting career. In 2017, she inherited her mother’s estate, which is currently valued at $18 – $25 million. She lives in Beverly Hills, California.

While studying in college, she was interned with HBO Documentary Films and Another Planet Entertainment.

She starred alongside famous actors Emma Roberts, Lea Michele, Abigail Breslin, and many others in Scream Queens. After her mother died in 2016, she constantly wore earmuffs in every episode as a tribute to her mom.

She has a French bulldog named Tina.

In 2018, she played Mallory, a powerful witch in the 8th season of the American Horror Story.