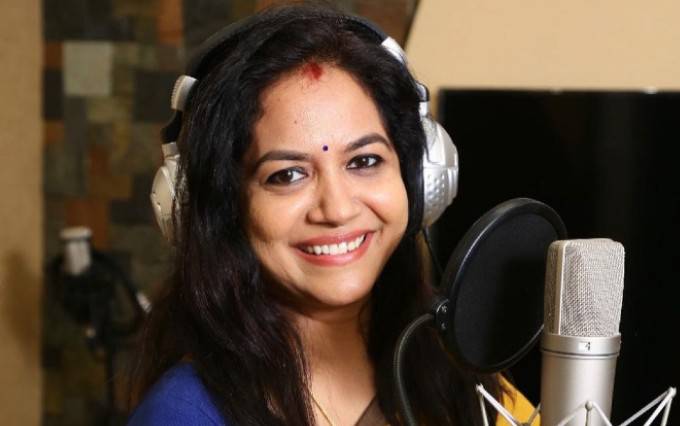 Sunitha Upadrashta, better known by her stage name Sunitha Upadrashta, is an Indian playback singer and voice actress. She has predominantly worked in the south Indian film industry, where she has recorded numerous songs in both Tamil and Telugu. In addition, she has also rendered her voice for over 750 films as a dubbing artist.

She has hosted many singing reality shows in Telugu and appeared as a judge for them before achieving fame as a singer. Sunitha has received several accolades including the National Award from All India Radio under the light music category in 1994 at the age of 15 years.

Singer Sunitha was born on the 10th of May 1978, in Guntur, Andhra Pradesh into a Telugu Brahmin family. She is currently 44 years old.

Sunitha was married to her husband, Kiran when she was just 19 years old. They got divorced and are no more a couple now. They both had two children together – a son named Aakash (born in 1997) and a daughter named Shreya (born in 1998).

In December 2020, Sunitha announced that she got engaged to her longtime friend Rama Krishna Veerapaneni. On January 9, 2021, the pair got married in a private affair attended by only family and close friends.

Singer Sunitha started her career as a playback singer at the age of 17 when she rendered voice for the song  “Ee Vela Lo Neevu” in Sri Sasi Preetham composition and written by Sirivennela Sitaramasastri. It was from her debut Telugu film Gulabi. She has sung a number of songs in Tamil, Telugu, and Kannada.

She is well known for appearing as a judge on Maa TV’s singing reality show, Super Singer since its 4th season. She has been currently hosting a singing talent show, SaReGaMaPa Lil Champs on Zee Telugu.

Known for her versatility, Sunitha is a familiar face in South Indian cinema, at least to music lovers. While the exact figure of her net worth is unknown, she should have accumulated a net worth of over $2 million. Her source of income includes singing, voice acting, stage performances, endorsements, television appearances, and tours.

Born into a family of musicians, Sunitha began learning vocals and music from her tender age. At thirteen, she took music classes from Pemaraju Surya Rao in Carnatic Vocal and Light music from Kalaga Krishna Mohan for eight years.

Sunitha at age 20 participated in Tyagaraja Aradhana Utsavalu along with her guru Sri Pemmaraju Surya Rao.

She use to take part in various devotional programs and is a regular singer at Tirumala Tirupati Brahmotsavam.

Singer Sunitha first performed in Light Music on All India Radio in 1995 when she was 17 and has performed in more than 500 television and radio programs until now.

She visited various countries including USA, Dubai and other countries through her concert titled  ‘Musical Moments With Sunitha’.

Sunitha performed with other musicians at the inauguration ceremony of Amaravathi, new capital of Andhra Pradesh.

During the time of 50 years of Independence, she has sung Vande Mataram along with S.P.Balasubrahmanyam at the Congress Plenary Meet.

Singer Sunitha has her own self-titled YouTube channel where she uploads her performances, prank videos, hilarious content and happenings from her life.