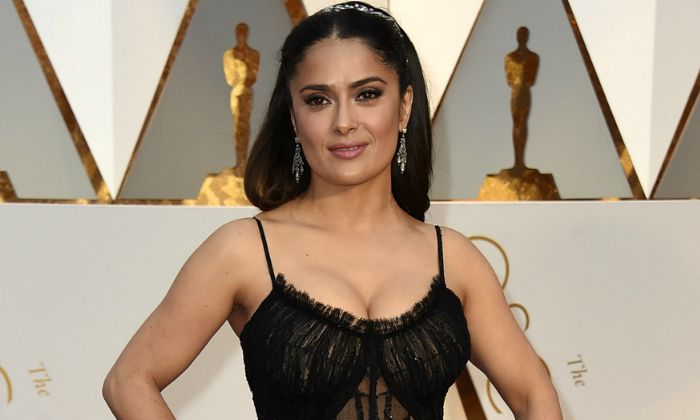 Salma Hayek is a Mexican and American actress and producer who caught global fame with her flawless performance as Frida Kahlo, a Mexican painter, in the critically and commercial successful biopic, Frida. For her work in the movie, she was nominated for Best Actress for an Academy Award, BAFTA Award, and Golden Globe Award.

She received an Emmy Award nomination for Outstanding Guest Actress for guest-starring in the ABC comedy-drama series, Ugly Betty. Her role in Beatriz at Dinner earned her an Independent Spirit Award nomination in 2017. Some of her remarkable works include Grown Ups and its sequel Grown Ups 2, Puss in Boots, Tale of Tales and The Hitman’s Bodyguard.

Salma Hayek was born on the 2nd of September 1966, in Coatzacoalcos, Veracruz, Mexico. She is currently 55 years old.

Salma Hayek is the oldest of two children born to Diana Jiménez Medina, opera singer and talent scout, and Sami Hayek Domínguez, an entrepreneur who runs a successful industrial equipment company and also an oil company executive. Her father once ran for mayor of their hometown, Coatzacoalcos. She has a younger brother named Sami, who is a furniture designer. Her father is Mexican of Christian Lebanese descent, while her mother has Mexican Spanish roots.

Once settled in the United States, she attended Academy of the Sacred Heart, an independent girl’s Catholic school in Grand Coteau, Louisiana, when she was twelve years old. During this time, she was diagnosed with dyslexia. She, then, moved to her home country, where she enrolled at the Universidad Iberoamericana in Mexico City, focusing on International Relations. Salma also attended Ramtha’s School of Enlightenment and is a practitioner of yoga.

Salma Hayek had previously been romantically involved with many men before her marriage with French entrepreneur Francois-Henri Pinault. Her husband is a French businessman and chairman and CEO of Kering since 2005. The couple started dating in 2006 and became engaged the following year. She announced that she’s expecting her first child with her husband in March 2017 and gave birth to daughter Valentina Paloma Pinault on September 21, 2007, at Cedars-Sinai Medical Center in Los Angeles, California. The couple married on Valentine’s Day 2009 in Paris, France, and held a second ceremony soon after in Venice.

Without a doubt, the bombshell Hayek is one of the sexiest actresses in the industry with attractive vital statistics that compliments her petite figure. She has large natural breasts with a slender and sleek waist and wide hips. No wonder she attracts men from all age groups and she is never shy flaunting her bootylicious assets in her movies.

Salma Hayek made her acting debut in the 1993 American drama film Mi Vida Loca (aka My Crazy Life), playing her part as Gata.

She got her first major break with the Mexican film, El Callejón de los Milagros (Miracle Alley), in which she played the role of Alma. It was one of the most successful films in the history of Mexican cinema. For her role, she received an Ariel Award nomination.

Salma landed her first television role, playing Fabiola in the Spanish-language telenovela, Un Nuevo Amanecer, in 1988. She played the title role in Teresa, a successful Mexican telenovela, the following year.

Her breakthrough role came in 2002’s Frida, a biographical drama film that essayed the professional and private life of the surrealist Mexican painter Frida Kahlo. She co-produced and played the title role in the film, which earned a total of six Academy Award nominations. She won the best actress nomination for her role in the film, making her the first Latin actress to be nominated in that category.

Do You Know How Rich Salma Hayek is? She has an estimated net worth of $200 million, thanks to her successful acting career and business ventures. Her husband, Francois Henri-Pinault, is estimated to be over $34 billion.

Salma is an Arabic name that means “peace” or “calm”.

She is good friends with Ashley Judd and Penelope Cruz.

In 2004, she became the spokeswoman for Avon’s makeup and fragrance lines.

Salma founded her own film production company called Ventanarosa in 2000.

She was named one of the ten most stylish women in the world by Mr. Blackwell in 1997.

Hayek launched her own line of cosmetics, skincare, and hair care products called Nuance by Salma Hayek, in 2011, to be sold at CVS stores in North America.

In August 2018, she was awarded the Franca Sozzani Award at the Venice Film Festival.

She is the godmother to Robert Rodriguez’s children.

She won a Daytime Emmy Award for Outstanding Directing in a Children/Youth/Family Special for The Maldonado Miracle in 2004.

Her beauty rule – Never to go to sleep before washing your face. No matter how tired you are.

Ever since her inception into acting, she takes all possible efforts to increase her popularity through different mediums, including social media platforms. She has amassed over 10 million followers on Instagram.