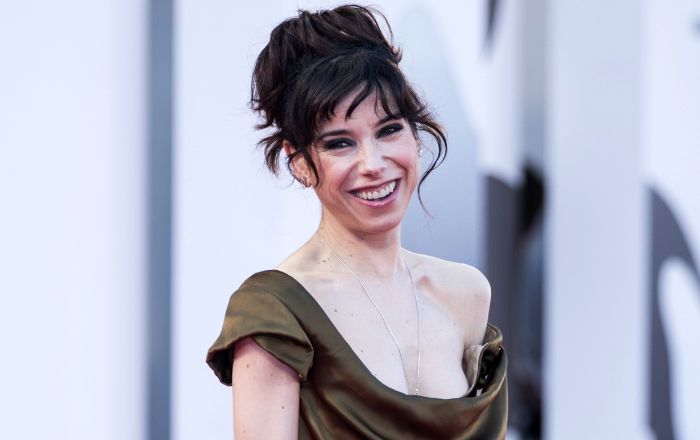 An English actress Sally Hawkins who is best known for her starring role as Poppy Cross in Happy-Go-Lucky for which she won over a dozen prestigious awards including Golden Globe and Silver Bear for Best Actress. She also earned several nominations for her role as Ginger in Blue Jasmine.

She also played the lead role of Elisa Esposito in the fantasy film The Shape of Water, to universal acclaim, receiving nominations for the Academy Award and BAFTA Award for Best Actress. As of 2022, Sally Hawkins has an estimated net worth of $4 million US dollars.

Hawkins attended James Allen’s Girls’ School in Dulwich, and later graduated from the Royal Academy of Dramatic Art in 1998.

She hasn’t disclosed anything about her being in relation with anyone in the present or in the past. However, as of now, the gorgeous actress is presumed to be single.

Sally Hawkins got her break in the 2002 Mike Leigh film “All or Nothing” for her role as Samantha.

Before that, she had an uncredited role in the 1999 film Star Wars: Episode I – The Phantom Menace.

In 1999, Hawkins appeared on an episode ‘To Have and to Hold’ in BBC One’s medical drama series Causality for her role as Emma Lister.

She has appeared in a lot of successful movies ever since she started her career appearing theatrical plays. She earned acclaim and fame for her roles as Poppy Cross in the 2008 film, Happy-Go-Lucky, as Rita O’Grady in Made in Dagenham (2010), as Ginger in Blue Jasmine  (2013) and as Elisa Esposito in The Shape of Water (2017).

As of 2022, Sally Hawkins has an estimated net worth of $4 million US dollars.

Beginning her career as a stage performer, Sally Hawkins has appeared in several theatrical plays like ‘Accidental Death of an Anarchist’, ‘Romeo and Juliet’ and ‘The Cherry Orchard’.

In 2000, she performed in theatrical versions of Much Ado About Nothing and A Midsummer Night’s Dream.

She has rendered her voice for several radio series like ‘Concrete Cow’ , ‘War with the Newts’, and ‘Book at Bedtime: The Girl on the Train’, to name a few.

Sally earned more than 20 nominations for her role in the 2008 film, Happy-Go-Lucky and bagged 16 awards including the Golden Globe Award for Best Actress – Motion Picture Comedy or Musical and the Silver Bear for Best Actress at the 58th Berlin International Film Festival.

Sally was awarded the London Film Critics’ Circle Award for British Actress of the Year in 2016 and 2017 for her astonishing performance in the films, Maudie and Paddington 2, respectively.