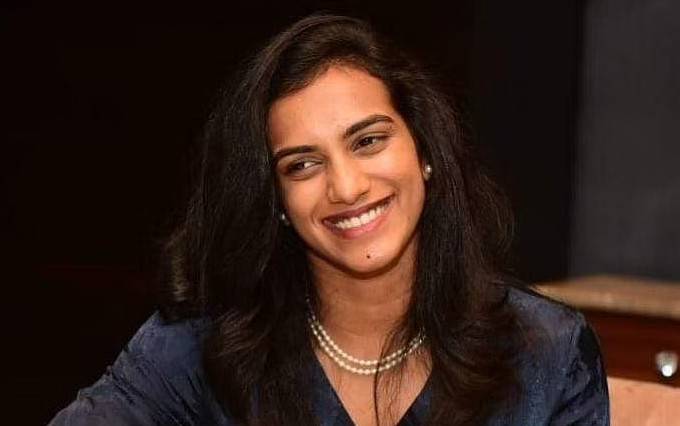 P. V. Sindhu is an Indian professional badminton player, who became the first Indian woman to win an Olympic silver medal at the 2016 Summer Olympics. She has several accomplishments to her name including the first Indian ever to win Korea Open Super Series and to win a medal at the Badminton World Championships (Singles). In April 2017, she reached the highest ranking of number 2 in women’s singles and is currently ranked at no. 3 in women singles.

Sindhu comes from a family of athletes. Her father, P. V. Ramana, and her mother, P. Vijaya, both were national-level volleyball players. Her father played for the Indian volleyball team that won the bronze medal in the 1986 Seoul Asian Games and was awarded the Arjuna Award in 2000 for his contribution to sports. Her elder sister, P. V. Divya, was a national-level handball player.

Sindhu attended Auxilium High School in Hyderabad until 9th grade and later completed her studies through correspondence. She obtained her MBA from St. Ann’s College for Women in Mehdipatnam.

Unfortunately, we do not know much about her personal life in terms of her relationship status. She is not vocal about her private life and has successfully managed to keep that aspect of her life away from the media.

Sindhu made her International Debut in 2009 at the Sub-Junior Asian Badminton Championships in Colombo earning a bronze medal. With that win, she came onto the scene making her presence felt to the larger population of India. At a very young age, Sindhu pulled off massive upset bagging medals at World Championships, and obviously, her winning list is quite lengthy.

As of September 2017, she played 326 matches representing India in singles of which she won 227 matches. And, in doubles, she won 9 out of 17 matches played.

Being one of the popular and top-earning athletes in the country, she has endorsed several brands and appeared in their TV commercials.

She was made the first brand ambassador of Bridgestone India.

Sindhu has an estimated net worth of $10 million US dollars as of 2023. To date, she has won a cash prize of Rs 12 crore or $2 million US dollars. She lives with her family in a luxury house in Hyderabad and owns a BMW.

In February, Sindhu signed a multi-mullion deal worth $7 million with Chinese sports brand Li Ning, which is considered one of the biggest endorsement deals in the sport.

She has been playing Badminton since she was 8.

Sindhu first learned the basics of the sport with the guidance of Mehboob Ali at the badminton courts of the Indian Railway Institute of Signal Engineering and Telecommunications in Secunderabad.

She currently works as a deputy sports manager with Bharat Petroleum.

She was made Deputy Collector by the Andhra Pradesh Government.

In 2014, P V Sindhu was named FICCI Breakthrough Sportsperson of the Year.

The same year, she was named NDTV Indian of the Year.

At the 2016 Summer Olympics, she made history by reaching the finals of an Olympics badminton event and thus becoming the first-ever Indian to reach the finals and the youngest Indian to make a podium finish in an individual event at the Olympics.

In 2018, she became the first Indian to win the BWF World Tour Finals after defeating Japan’s Nozomi Okuhara in the final.

That same year, she won a silver medal in women’s singles at the 2018 Commonwealth Games as well as the 2018 Asian Games.

She holds the record of being the first Indian to win gold at the 2019 World Championships. She defeated Nozomi Okuhara of Japan in straight sets in the final.

In January 2020, she was honored with Padma Bhushan, the third-highest civilian award in India.

She won Bronze at the Tokyo Olympics, by which she became the first Indian female badminton player to win multiple medals at the Olympics.