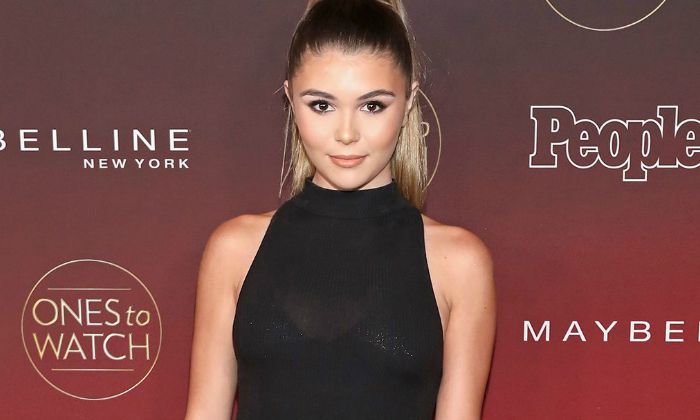 Olivia Jade is an American YouTuber and social media personality who is best known as the daughter of the celebrity couple Lori Loughlin and Mossimo Giannulli. She first attained fame on social media, starting with Instagram in July 2013, and a year later, she joined YouTube. On her exclusive self-titled channel, she talks about makeup, fashion, and lifestyle on which she has garnered over 2 million subscribers.

She has over 1.4 million followers on the photo-uploading app, Instagram. In 2019, Jade made it to the headlines when her name surfaced in one of the biggest the elite university admissions scandals where her parents caught bribing around $500,000 to get her and her sister, Isabella, recruited for the University of Southern California’s university’s rowing team despite neither of them having participated in the crew.

Olivia Jade was born on the 28th of September 1999, in Los Angeles, California, United States of America. She is currently 22 years old.

Olivia Jade is the youngest daughter of actress Lori Loughlin and designer Mossimo Giannulli. Her mother is best known for her work in the TV series ‘Full House’. Her father is a fashion entrepreneur and founder of the American clothing company, Mossimo. She has an older sister, Isabella Rose Giannulli, and an older half-brother, Gianni Giannulli. Her sister is also an Instagram star who has a decent amount of following on the platform,

Olivia Jade attended Marymount High School in Los Angeles, California. After completing her school education, she got herself enrolled at the University of Southern California.

Olivia Giannulli was in a relationship with a fellow social media star, Tyler Greenwald. He attends the University of Texas and is featured in many of her videos and posts. He stood by her side and gave moral support during the struggling days of her social media career. The duo broke up in 2018 after Tyler enrolled at the University of Texas at Austin and move away to attend the college. Their relationship slowly started fading away and crumbled due to the long distance between them. She deleted all of his photos and videos from her social media accounts.

Post her breakup with Tyler, she started a new life with American singer and songwriter Jackson Guthy. It is being reported that the two have been dating for quite a while until they parted ways in April 2019.

The elite college admission scandal came to light in March 2019 involving Jade’s parents and many other famous celebrities. In 2018, Jade’s parents sent a photo of her posing on an ergometer rowing machine as a part of her application to the University of Southern California (USC), despite the fact, neither of their daughters have participated in the competitive sports nor was interested in becoming one. The scandal broke out in March of 2019, and apparently, it is alleged that her parents paid multiple bribes amounting to $500,000 to a coach at the university in exchange for having her and her sister Isabella as athletic recruits for the crew team. The scandal already led to the downfall of her online career as a beauty retailer, Sephora has ended its ties with her jade and pulled out her products from the store. According to sources, she distances herself from her parents and reportedly living with her boyfriend, Jackson Guthy, after the scandal surfaced.

Jade launched her social media career while still in school by joining the photo-uploading platform, Instagram in July 2013. Over time, she has gained over 1.4 million followers on the platform, thanks to her irresistible photos. In June 2014, she created a YouTube channel called “Oliva Jade” and began uploading videos. She covered a wide range of topics including fashion, makeup, lifestyle, and health. She’s successful ever since established herself as a beauty influencer and garnered an impressive 2 million subscribers. She also runs an alternate channel called “Olivia Jade Vlogs” to which she uploads videos of her everyday life. This channel has amassed over 100k subscribers.

In 2015, Jade appeared in the series Entertainment Tonight.

Jade’s net worth is estimated to be around $1 million dollars.

Olivia is featured in magazines like Alist Nation Magazine and Teen Vogue, among others.

In 2017, she faced backlash prompting expressions of concern about her driving habits when she crashed her car while singing along to Stevie Wonder’s “Signed, Sealed, Delivered I’m Yours” as she filmed herself with her mobile phone.

She collaborated with actress Natasha Bure on a video called “Seven Second Challenge.”

She appeared in an episode of the game show Tap that Awesome App, competing for a US$5,000 prize for charity in 2016.

Jade stated in a video saying, “I do want the experience of like game days, partying … I don’t really care about school, as you guys all know” before attending classes at USC. Her fans described her as a “privileged”, “ignorant” and “spoiled” kid to which she apologized saying, “I said something super ignorant and stupid, basically, … “I’m really disappointed in myself.”

In September 2021, she competed in season 30 of Dancing with the Stars.