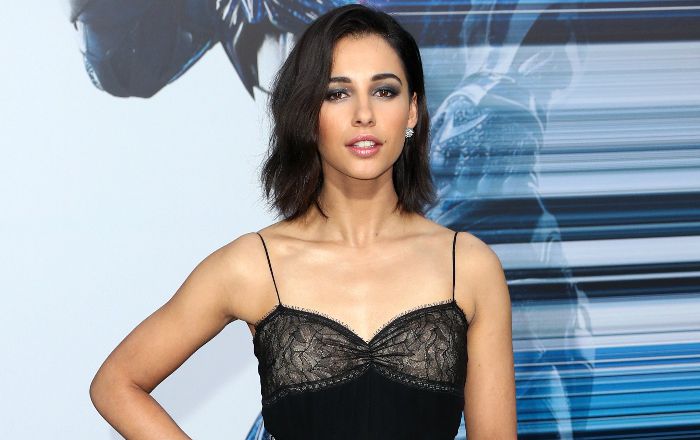 Naomi Scott is an English actress and singer who gained fame for her starring role as Kimberly Hart, the Pink Ranger, in the 2017 movie, “Power Rangers”. She starred as Maddy Shannon in the science-fiction drama series “Terra Nova”. She had a recurring role in the British television series “Lewis” from 2015 to 2016. Some of her notable works include Aladdin, Charlie’s Angels, Distant, and Anatomy of a Scandal.

Naomi Scott was born on the 6th of May 1993, in London, England, United Kingdom. She is currently 28 years old.

Naomi Scott is the daughter of an Uganda-born Indian, Usha Scott (née Joshi), and an English father, Christopher Scott. Both her parents are pastors at the Bridge Church, Woodford in Redbridge, North East London. She has an older brother, Josh Scott. Naomi belongs to the Indian and English ethnicity.

Naomi Scott has her first major acting role in the 2015 American-Chilean biographical survival film, “The 33”, which was directed by Patricia Riggen. The film was based on the real events of the 2010 mining disaster, in which a group of thirty-three miners was trapped inside the San José Mine in Chile for more than two months. She played Escarlette Sepulveda in the film.

Naomi got her big break in television with the Disney Channel UK series Life Bites from 2008 to 2009, in which she played the role of Megan.

She released her debut EP, “Invisible Division”, on August 25, 2014, as a digital download. It spawned hit numbers “Motions,” and “Say Nothing.”

Naomi was highly praised for her performance as Kimberly Hart, the Pink Power Ranger, in the 2017 film Power Rangers. she also earned widespread acclaim for playing Maddy Shannon in the science-fiction drama series Terra Nova in 2011.

She has done endorsement work for Zales.

She performed regularly in school musical and drama productions in high school.

Scott has participated in missionary and outreach work while she was young.

Naomi started her career as a musician performing with the Bridge Church Youth Band.  She was later discovered by Kelle Bryan, a pop singer from the band Eternal.

She released her second EP, Promises, on 5th August 2016.

Naomi played Mohini “Mo” Banjaree in the Disney Channel Original Movie Lemonade Mouth in 2011. She gave an audition for this role through a video call conference from London. She also rendered a soundtrack for this movie with Bridgit Mendler.

Driven by passion, she enjoys songwriting, singing, dancing, and playing the piano.

She can be next seen in the live-action remake of Aladdin as Princess Jasmine.

Naomi starred as one of the three lead ‘Angels’ in the new 2019 Elizabeth Banks-directed reboot film of Charlie’s Angels, along with Kristen Stewart and Ella Balinska.