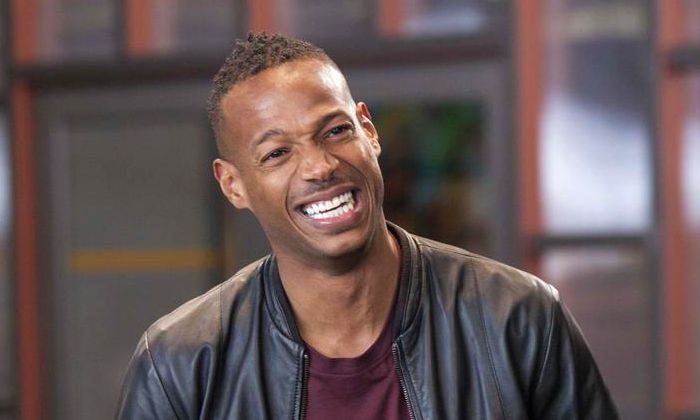 Marlon Wayans is an American actor, comedian, and producer and the youngest of the Wayans siblings. His early claim to fame includes portraying the character of Marlon Williams in The WB sitcom The Wayans Bros as well as dong various roles on the sketch comedy TV series In Living Color. Having been in the business for more than three decades, Marlon has made a name for himself in the entertainment industry.

He had his own sitcom called Marlon that aired on NBC for two seasons in 2017 and 2018 respectively. He co-starred with his brother, Shawn Wayans, in projects like The Wayans Bros., Scary Movie, Scary Movie 2, White Chicks, Little Man, and Dance Flick. Besides all this, Marlon is also credited with A Haunted House film series, Sextuplets, Naked, Funniest Wins, Fifty Shades of Black, Respect, and On the Rocks.

Marlon Wayans was born on the 23rd of July 1972, in New York City, New York, United States of America. He is currently 49 years old.

Marlon Wayans was born the youngest of ten children to Howell Wayans, who worked as a supermarket manager, and his wife, Elvira Wayans. He has nine siblings, all of whom are already big names in the entertainment industry.

Marlon attended and graduated from Fiorello H. LaGuardia High School of Music & Art and Performing Arts in New York City. Later, he spent two years at Howard University from 1990 to 1992 before dropping out of college in pursuit of his acting career.

Talking about his love life, Marlon made a lot of headlines with the end of his marriage to Angelica Zachary. The couple got married in September 1992 and they have two children, Amai Zackery Wayans (b. May 24, 2000), and Shawn Howell Wayans, (b. February 3, 2002). The two separated in 2013, followed by their divorce that same year. They have joint custody of their two children.

Apart from Marlon’s romantic connection with Angelica, he is also linked to actress Salli Elise Richardson and television personalities Simply Jess and Tami Roman in the past.

He was also rumored to be dating actress and model, Essence Atkins, but he later clarified that he had nothing to do with the rumors and is baseless.

Marlon Wayans made his acting debut with a small-time role as a pedestrian in his brother, Keenen Ivory Wayans’s blaxploitation parody film, I’m Gonna Git You Sucka, in 1988. Apart from directing the film, Keenen also starred in along with his siblings Damon, Kim, Nadia, and Shawn.

In 1991, Marlon was cast in various roles in the television series, The Best of Robert Townsend & His Partners in Crime.

Without a doubt, Marlon is one of the most successful among the Wayans siblings. His childhood experience would lead her to pursue a career in the entertainment industry, following the footsteps of his siblings.

He got his first break with the sketch comedy television series, In Living Color, which was created, written, and starred by his brother Keenen. He was a series regular along with his siblings Damon, Kim, and Shawn which ran for five seasons from April 15, 1990, to May 19, 1994, on Fox.

Marlon achieved mainstream success with The WB sitcom The Wayans Bros., co-starring his brother, Shawn. The series revolves around the lives of the real brothers, Shawn and Marlon, which, obviously boosted his career and brought in a lot of fame.

Marlon and Shawn co-wrote and starred in their brother, Keenen’s horror spoof film, Scary Movie, that released on July 7, 2000. The movie was a huge hit at the box office, minting a whopping $278 million against the production budget of $19 million. On the heels of the success of the movie, the Wayans brothers made several sequels: Scary Movie 2 (2001), Scary Movie 3 (2003), and Scary Movie 4 (2006).

His other notable appearances include G.I. Joe: The Rise of Cobra as Wallace A. Weems/Ripcord, A Haunted House film series as Malcolm Johnson, and Fifty Shades of Black as Christian Black.

Thanks to his various professional endeavors, Marlon Wayans now has a net worth of $40 million dollars. This impressive net worth can be credited to all of his accomplishments as an actor and comedian. There is no doubt that he will continue to accomplish whatever goals he sets out to.

His first son, Shawn Howell, is named after his brother Shawn Wayans and father Howell Wayans.

Marlon was originally slated to play Robin/Dick Grayson in Batman Forever (1995) when Tim Burton was considering directing it, but once Joel Schumacher ultimately took the helm, he went on to cast Chris O’Donnell instead.

Since he had already signed the contract to play Robin, the producers paid him a penalty fee as well as he’s still receiving royalty payments for the movie to this day.

In 2004 he won a BET Comedy Award for Outstanding Writing for a Box Office Movie for White Chicks.

He was a close friend of the popular rapper Tupac Shakur until his tragic death in 1996.

Marlon has appeared in commercials for brands like Vitamin Water, Collect 1-800 ATT, and AT&T.

He is big a fan of the Pittsburgh Steelers and the New York Knicks.