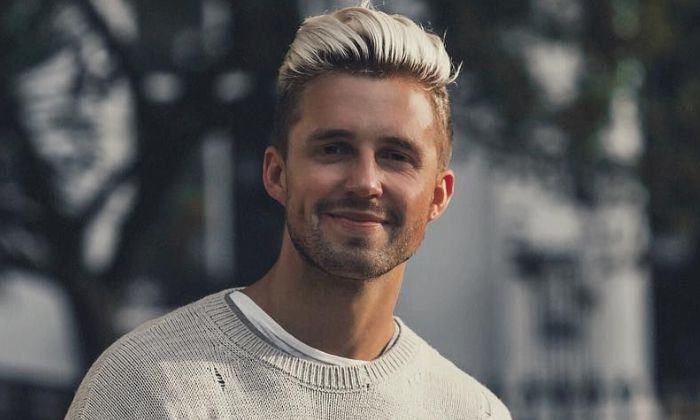 Marcus Butler is an English model and former YouTuber who initially gained fame through the videos he posted on his self-titled Youtube channel. He started his career way back in 2010 and enjoyed much success throughout his YouTube journey. He recently quit YouTube and has since removed all the videos from his channels, MarcusButler and MoreMarcus, but still, the channels have garnered combined subscribers of over 6 million.

Marcus has certainly come a long way from a humble start to one of the most popular internet personalities. After quitting YouTube, he sifted his focus entirely on fashion and lifestyle and now owns a clothing brand called nu-in with his girlfriend Stefanie Giesinger. He’s also an author and singer and has released an autobiographical book, titled Hello Life! in 2015. He co-hosted the podcast called Lower Your Expectations with Matt Viney.

Marcus Butler is the middle of three children of Richard D. L. Butler and his wife Susan E. He has two siblings, Natasha Butler and Heidi Butler.

Marcus Butler had a short-term relationship with British fashion and lifestyle blogger Niomi Smart from 2013 and 2015. During the course of their relationship, she was featured in many of his YouTube videos, apparently deleted now, and also founded a healthy snack delivery company called SourcedBox. The couple broke up in 2015.

He began dating Germany model Stefanie Giesinger in early 2016 after meeting her during the amfAR party, held at the French Riviera. She is the winner of the ninth season of Germany’s Next Top Model. They both founded the fashion label nu-in along with the other two friends.

Marcus always had a knack for fashion, music, fitness, and writing from an early age. He launched a YouTube channel under his name back in 2010 whilst still in college and began uploading videos covering a wide range of topics.

It didn’t take long for Marcus to build up a loyal fan base that eventually led to the creation of another channel, MoreMarcus, a vlogging channel. As his fan base continued to grow, Marcus has become one of the most prominent YouTubers in his home country. He has done several collaborative videos with the likes of Joe Sugg, Conor Maynard, Caspar Lee, Troye Sivan, and Tyler Oakley.

His success on YouTube has attracted a combined following of over 6 million subscribers on both of his channels. Despite having quit YouTube and deleted all the videos that he has made so far, his fans didn’t give up on him and still hope that he would make a comeback anytime soon.

In 2015, he published his autobiographical book entitled Hello Life in the US and the UK. He appeared as a contestant on Celebrity MasterChef in 2016 and was also featured on the British television show Release the Hounds alongside Joe Sugg and Alfie Deyes.

Oher television appearances include the 13th season of Ant and Dec’s Saturday Night Takeaway alongside Alfie Deyes, YouTube Rewind, and Good Morning Britain and also co-hosted CharliSJHDeeleyNat TV for a while.

He released a song entitled I’m Famous featuring Conor Maynard in 2016, which debuted at number 34 on the UK Singles Chart.

Marcus has walked runways for the likes of D&G and L’Oreal.

Dominique’s success as a lifestyle vlogger has significantly helped him to build his wealth. He has an estimated net worth of around $1.5 million dollars as of 2022. As Marcus continues to move forward with his career, it is expected that his fortune will also continue to increase.