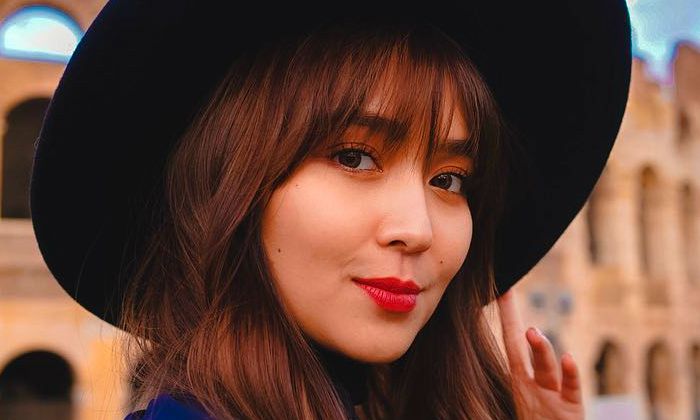 Kathryn Bernardo is a Filipino actress and singer who rose to prominence for having played the role of Mara in the TV series Mara Clara. She is the most bankable actress in the Philippines entertainment industry whose movie Hello, Love, Goodbye holds the highest-grossing Filipino Film of All Time.

Besides all her accomplishments in show business, she is also a social media influencer who’s got over 17 million Instagram followers and 11 million Twitter followers respectively.

Kathryn Bernardo was born on the 26th March of 1996, in Cabanatuan City, Nueva Ecija, Philippines. She is currently 26 years old.

Kathryn Bernardo is the youngest in her family of six. Her parents are Luzviminda “Min” Dionesio Manuel and Teodoro “Ted” dela Cruz Bernardo. She has two older sisters – Chrysler Bernardo and Kaye Bernardo, and one brother named Kevin Cabanatuan.

For her education, Kathryn attended OB Montessori Center Inc. until her acting debut in 2003. She was then home-schooled as she became busy with acting. She is currently pursuing a marketing degree at Enderun College, Taguig.

Bernardo has been dating fellow actor and her co-star Daniel Padilla since July 2013. They have worked together in several movies like Crazy Beautiful You, Barcelona: A Love Untold, Can’t Help Falling in Love, Gandarrapiddo: The Revenger Squad, The Hows of Us.

She has won several awards along with her partner for their outstanding performance in movies and television series.

Kathryn Bernardo’s first television role acting career as Young Cielo San Carlos, a minor role in the TV series It Might Be You in 2003.

After being cast in a string of supporting roles, she landed her first major role in the ABS-CBN fantaserye Super Inggo in 2006 where she played Maya Guevarra, the love interest of Budong, played by Makisig Morales.

Kathryn Bernardo had her first feature film role in the movie Lupe: A Seamans Wife, in which she played Young Lupe.

The gorgeous beauty has seen plenty of success throughout her acting career. She was a part of several high-profile movies that eventually took her career to the whole new level.

Her portrayal of Mara del Valle in the teen TV drama series Mara Clara is undoubtedly one of Kathryn’s most notable works in her early years. The series, which is a remake of the 1992 series of the same name, aired on ABS-CBN from October 25, 2010, to June 3, 2011.

Kathryn is one such actress in the Philippines entertainment industry who has starred in several high-grossing movies. Her movie, She’s Dating the Gangster, where she played the female lead became the highest-grossing Filipino film adaption from book. Directed by Cathy Garcia-Molina, the film was based on a pop fiction book of the same name, had Daniel Padilla, Sofia Andres, and Khalil Ramos playing in the important roles.

She played the female lead in the critically acclaimed and commercially successful movies, The Hows of Us and Hello, Love, Goodbye. She starred opposite her real-life partner Daniel Padilla in both the films. The former was the second highest-grossing Filipino film of all time while the latter is declared the highest-grossing Filipino film of all time.

According to Phil News, Kathryn Bernardo’s net worth, as of 2023, is estimated to be worth $2 million.

The Filipino has accomplished a lot as an actress and has achieved great success than many her age. She is a force to be reckoned with when it comes to acting which has made her one of the most popular celebrities in her home country.

Kathryn is quite active on social media where she shares a lot regarding her current and upcoming projects. Furthermore, she cashes in her popularity on social media platforms like Instagram and Twitter through product endorsements.

She is largely popular on Instagram with over 17 million people following her on the photo-sharing app. She’s got over 11 million followers on Twitter. Kathryn’s Facebook page has over 4.5 million followers. She jumped onto the YouTube bandwagon on December 26, 2019, and her channel has accrued over 1.4 million subscribers in less than two months. That’s the popularity we are speaking about.

She got into acting very early in her career that eventually helped her to master the craft.

She is a huge fan of Narnia.

Kathryn Launched her own boutique called Bulinggit Stuff Shop in 2004.

She won the German Moreno Youth Achievement Award at the Filipino Academy of Movie Arts and Sciences (FAMAS) awards in 2011.

She cites Sarah Geronimo and singer Yeng Constantino as her pop music idols.

In 2012, she won the Most Promising Actress of the Year award at the Yahoo! OMG! Awards.

Her fans are referred to as “KathCakes”.

She is an avid animal lover and has 7 dogs.

An interesting tidbit about her is that she’s got 9 ear piercings.