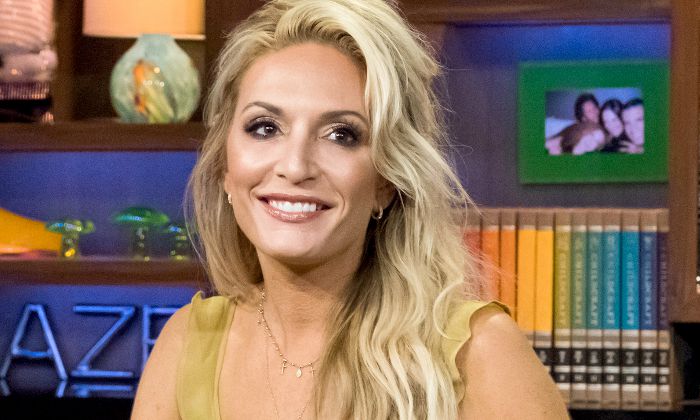 Kate Chastain is an American television personality who is no stranger to the television audience if you are a huge fan of Bravo TV’s reality series titled Below Deck. She joined the show as the Chief Stewardess in 2014 and has been a part of the show since then. The blonde reality star is entertaining people through television shows which catapulted her to fame. She is very vocal about her sexuality and identifies herself as bisexual since she has dated both men and women.

Kate Chastain was born on the 2nd of January 1983, in the Sacramento City of California in the United States of America. She is currently 39 years old.

Kate Chastain’s family is quite a big one with seven members including five children. She is the daughter of Michael Monastery, a former rock musician, and his wife Jerri Renee Hastey. She has four siblings, two brothers, and two sisters. Her mother is remarried to a guy named Michael Hastey after her parents divorced when she was small.

She attended El Camino Fundamental High School in Sacramento but apparently, she didn’t graduate from school as she lost interest in studies during her final year and didn’t attend most of the classes.

There are many celebrities who have openly revealed their sexual orientation to the media and the matter of fact attracts public attention as well. Kate is one such artist who came out as bisexual at some point in her life. She is known to have dated many people, both men, and women.

Kate’s first known relationship was with her Below Deck co-star, a woman named Rocio Hernandez. They both developed feelings for each other while working together on the reality show Below Deck and started dating during its fourth season. However, this relationship didn’t last long as the pair broke out following domestic violence.

In June 2016, Chastain was arrested and booked for domestic violence after she badly hurt Hernandez. Kate was arrested by police on Rocia’s complaint and she spent a day in jail in the Melbourne Beach Police Department. She was released after posting a $5000 bond.

She has also dated Ben Robinson, her co-star on Below Deck briefly.

The Below Deck star started out working in the yacht industry when she was 24 as a laundry stewardess. Over time, she fell in love with what she’s doing and was later promoted to the chief stewardess down the line. That’s when her life took a positive turn when landed the role of a chief stewardess on Bravo’s Below Deck. Other cast members on the show include Lee Rosbach, Simone Mashile, Courtney Skippon, Kevin Dobson, Ashton Pienaar, Brian de Saint Pern, Tanner Sterback, and Abbi Murphy.

Having been a cast of the show for several seasons, Kate found plenty of success, eventually leading her to gain a massive amount of fan base on social media. Today, Kate is one of the most popular reality stars in the American television industry.

Coming to her net worth, Kate Chastain has a reported net worth of $500 thousand dollars, thanks to her successful career in the Yacht industry. Apart from her appearance on Below Deck, the blonde-haired beauty also earns quite a lot of money from endorsements and other appearances.

She explored her interest in performing arts at an early age and has appeared in a number of school plays.

Kate began her professional yachting career at the age of 24 years old. She earned her first Chief Stewardess job after 2 years of serving as a laundry stewardess.

Her dog is named Halo.

She has authored a book called Lucky Charming, putting together her years of experience as a yacht stewardess, which eventually became Amazon’s Best Seller in the Humor category.

Kate returned as Chief Stewardess in season 3 of Below Deck, which aired in 2015.

Chastain is open about being bisexual, and dating both men and women.