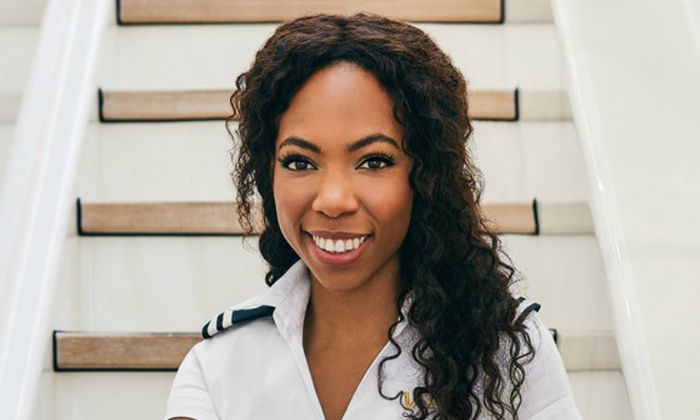 Simone Mashile is a South African yachtie, model, and television personality probably best known for her being cast on the seventh season of Bravo’s reality series Below Deck. She takes the job as the Second Stewardess working together with Chief Stew Kate Chastain and 3rd Stew Courtney Skippon. It’s no surprise that Simone is an academician with a degree in mathematics as she comes from a highly academic family but this free-spirited, curly-haired beauty has had a penchant for traveling and adventures since she was young. With her being cast in the Below Deck TV series, her traveling dream comes true.

Simone Mashile was born on the 7th of March 1994 in Cape Town, South Africa. She is currently 28 years old.

There’s not much known about her family or her early life, Simone hails from a family with a strong academic background. She spent most of her early life in apartheid South Africa which encouraged her to channel her entire energy into studies.

Being an academically bright student in school, Simone received scholarships for high school and college that enabled her to earn a degree in mathematics.

Needless to say, this is the most exciting topic that everybody is looking forward to. Apparently, we do not know much about Simone’s private life as she has never shared anything about her love life with the public. In fact, to be precise, she has not even shared any pictures or probably hints about her boyfriend, current or past, on social media. From her social media life, we can say that she is single and we are clueless about her romantic life.

After graduation, Simone Mashile secured a job related to her profession, and not long after, she grew tired of the 9to5 life and started modeling full-time. Before that, she was an occasional model. She traveled across the world including the likes of Cannes, California, Italy, and France as a part of her modeling career.

She embarked her yachting career in July 2017 and has since worked as a stewardess and sous chef in some of the most exotic locations in the French Riviera, with clients ranging from fashion designers to football players.

It’s no doubt that Simone is a fun-filled and adventure-loving personality. She appeared in front of the camera for the first time when she joined the crew of the seventh season of Bravo TV’s “Below Deck” reality TV series as Second Stewardess. Other crew members are Kate Chastain, Courtney Skippon, Kevin Dobson, Ashton Pienaar, and Brian de Saint Pern.

Mashile has already earned quite a large following on Instagram, thanks to her gorgeous modeling photos. Her fans can always follow her on Instagram @simonemashile, where she has 40,000 followers. She currently resides in Monte-Carlo, Monaco.

She was raised in South Africa.

She was good at academics in school while still balancing her adventure-loving personality.

Simone left a full-time job to embark on her dream adventurous life.

Simone Mashile has worked with several top fashion brands and her appearance on Below Deck will apparently boost her modeling career.

She is a fitness freak and her enviable body is evident to that. She posts a lot of pictures featuring her daily workouts and motivational quotes on Instagram that encourages people to get into shape and live their best life.

Simone’s life motto is “I am the master of my destiny, I am the captain of my soul.”

She also practices Yoga and Meditation.