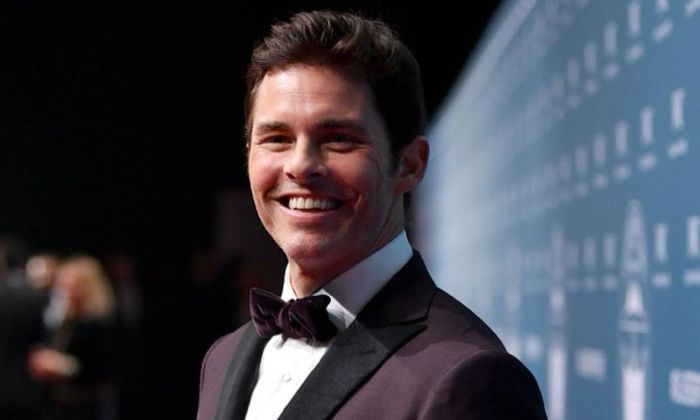 James Marsden is an American actor and singer who achieved fame in the global market with his portrayal of Cyclops in the X-Men film series. Having starred in a handful of critically and commercially successful movies, James secured prominent roles in such movies as Superman Returns, Enchanted, 27 Dresses, Hairspray, 27 Dresses, The Best of Me. and The Notebook.

On television, he is known for playing gunslinger Teddy Flood in the HBO science-fiction series Westworld as well as portraying Criss Chris on the NBC satirical sitcom in 30 Rock. In 2019, he starred as Steve Wood in Netflix’s Dead To Me. It’s no surprise that James Marsden is one of Hollywood A-listers and apparently he is worthy of it.

James Marsden was born on the 18th of September 1973, in Stillwater, Oklahoma, United States of America. He is currently 48 years old.

James Marsden is one of five children to James Luther Marsden, head of food safety at Chipotle Mexican Grill and formerly a professor of animal sciences and industry at Kansas State University, and Kathleen (née Scholtz), a nutritionist. He has two younger sisters, Jennifer and Elizabeth, and two brothers, Jeff and Robert.

He went through a brief depression phase when his parents divorced at the age of nine years old. For education, James attended Hefner Middle School and then attended Putnam City North High School in Oklahoma City, graduating in 1991.

After that, James enrolled at Oklahoma State University to study broadcast journalism. However, he quit his studies after attending college for over a year to pursue an acting career. There he was a member of the Delta Tau Delta fraternity.

On July 22, 2000, Marsden married actress Mary Elizabeth “Lisa” Linde, the daughter of famous country singer Dennis Linde. They welcomed their first child, son, Jack, in 2001 and she gave birth to their daughter, Mary, in 2005. The couple ended their married life of 11 years in September 2011.

That same year, he began dating Brazilian model, Rose Costa. They have a son named William Luca Costa-Marsden, who was born on December 14, 2012.

He was also linked up with actress Cherie Thibodeaux and actress and entrepreneur Suki Waterhouse in 2012 and 2015, respectively.

Marsden is currently in a live-in relationship with British singer-songwriter and actress Edei (aka Emma Deigman). They have been dating since 2015.

James landed his first acting job in Howard McCain’s comedy film “No Dessert, Dad, Till You Mow the Lawn,” playing the role of Tyler Cochran in 1994.

James Marsden made his acting debut as Steven Willis in the television film “In the Line of Duty: Ambush in Waco” in 1993.

He then went on to star in an episode of the NBC sitcom “Saved by the Bell: The New Class” as Chad Westerfield in 1993.

When you talk about the roles that apparently boosted his acting career, his comic book film roles are the ones that hit our minds first. His role as Cyclops in the X-Men movie franchise is one of his most memorable and biggest roles to date. Having worked alongside actors Patrick Stewart, Famke Janssen, and Hugh Jackman, James had the honor of acting in all three of the X-Men movies.

James saw a lot of success in the late 2000s. He played Richard White in Superman Returns in 2006. The following year, he gave two blockbuster hits. One was Hairspray, an adaption of the Broadway musical based on John Waters’ 1988 movie of the same name, where he played Corny Collins alongside John Travolta, Queen Latifah, and Michelle Pfeiffer.

He next appeared as Prince Edward in the Disney movie, Enchanted, where he co-starred with the likes of Amy Adams, Susan Sarandon, and Patrick Dempsey. Marsden not only delivered mind-boggling performances in the films but also got the opportunity to showcase his singing abilities while contributing to the soundtrack of the films. He sang two songs in each film and was widely received by the audience.

The success of the movies led to other prominent roles in movies like 27 Dresses, The Best of Me, and The Notebook, to name a few.

As of 2022, James Marsden’s net worth is estimated to be $10 million. Though he has appeared in many blockbuster movies across various genres, his net worth is nowhere near to his co-stars including Patrick Stewart, Hugh Jackman, John Travolta, Queen Latifah, Michelle Pfeiffer, Amy Adams, and Katherine Heigl.

Being credited as a versatile actor in the creative and entertainment industry, James has accrued a massive fan base on Instagram with over 1.3 million followers. His Twitter account has a little less than 10,000 followers.

He fell in love with acting at a very young age and even appeared in his college production of “Bye Bye Birdie” while studying at Oklahoma State University.

During his teen years, James even worked as a news announcer for a year on Good Morning Oklahoma.

He dropped out of college during his sophomore year and moved to Los Angeles to become an actor. After several failed auditions, he secured a role in the pilot episode of The Nanny as Eddie in 1993.

He played guest roles in a string of television series before landing his first major breakthrough in the Canadian television series, Boogies Diner, playing the character of Jason in just one episode of the series.

James was nominated for Teen Choice Awards nomination for Choice Movie Actor in a Comedy for his roles in Enchanted and 27 Dresses.

He has modeled for the brand Versace.

James starred in Disturbing Behavior opposite Katie Holmes and Gossip opposite Kate Hudson.

Marsden starred opposite Cameron Diaz in the 2009 horror film, The Box, a film adaptation of the 1970 short story “Button, Button” by Richard Matheson.

James was originally considered for the lead role in the 1998 movie “54”, however, the role went to actor Ryan Phillippe after he turned down the offer.

Standing at 5′ 10″ tall, James wore lifts for most of his scenes in the X-Men movies, because his character Cyclops is supposed to be 6′ 3″ compared to a 5′ 3″ Wolverine. He fell short of a few inches than Famke Janssen (as his love interest, (Jean Grey) and around 4 inches shorter than Hugh Jackman (who played Wolverine).

In 2019, he played Burt Reynolds in Quentin Tarantino’s comedy-drama film “Once Upon a Time in Hollywood”, however, his scenes didn’t make to the final cut.