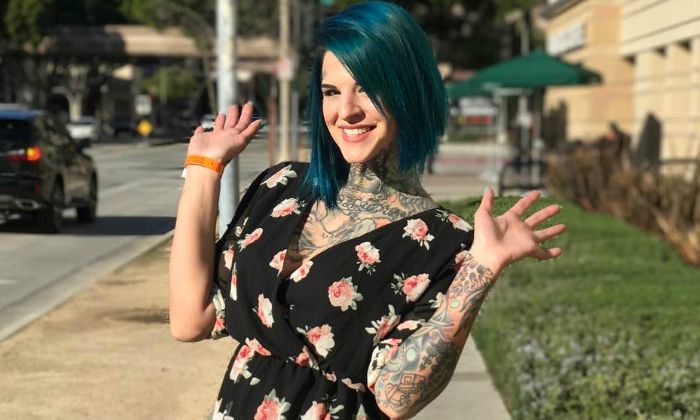 Heidi Lavon is an internationally published tattoo model, photographer, and media personality from Alaska who is probably known for her works within the Tattoo industry. She has been on the cover, and inside every major tattoo publication such as Tattoo, Ink Fashion, and Ultraviolet. In addition to her impressive modeling portfolio, she also is a contributing writer for Skin Art Magazine where she covers all tattoo-related topics and accounts from other people’s experiences.

Heidi Lavon was born on the 22nd of May 1987, in Casa Grande, Arizona, United States of America. She is currently 35 years old.

Heidi Lavon is the daughter of Caprice and Robert Lavon. She grew up along with her three sisters in Fairbanks, Alaska. She is of Irish, German, and Polish descent.

Lavon is engaged to James Marshall Ramsey, a United States Army Veteran, and an athlete. He is also a tattoo model who often accompanies her in photo shoots and editorials. The couple resides in Portland, Oregon.

Heidi Lavon started modeling at a very young age and took it to a whole new level when she moved to Portland, Oregon. She took modeling seriously when a photographer approached her and offered to shoot Lavon in her studio.

She got her first of several tattoos on her 18th birthday and by the time she was 21, she had inked as many as tattoos all over her body. In fact, she is obsessed with tattoos. That was the turning point in her professional career as she got more coverage and fame as a tattoo model. With over a decade of experience in tattoo modeling, she has established a name for herself in the beauty industry.

With a larger-than-life personality, she stresses utilizing her large platforms to reach and help others find the confidence within themselves to live their life with a more open mind with no concern for the nay-sayers.

Beyond her online presence, Heidi has been a licensed hairstylist for the last 13 years and loves incorporating her passion and knowledge for hair into her everyday modeling life and photography works.

She has amassed an Instagram following of 1.6 million followers and continues to grow while creating ongoing content for all of her other social channels including Youtube where she shares her passion for the beauty industry, as well as covering topics that make her relatable on so many other levels. Follow her on –

Lavon became interested in artwork when she was young.

Christian Saint is one of her favorite photographers, with whom she did a photoshoot for Tattoo Life Calendar 2018.

She is a licensed hairstylist and worked in a few independent salons, and corporate for about 10 years. She started working for herself in 2015.

Lavon was featured in the IFC comedy series Portlandia.

Lavon is a contributing writer for Skin Art magazine where she writes about various tattoo-related stories via her column “Heidi’s Universe”.

She has her own self-titled YouTube channel where she posts videos related to health and wellness, beauty, and lifestyle.

She often travels all over the US for tattoo conventions, photoshoots, and special events.

Lavon is a popular tattoo model from the US much like Vany Vicious.