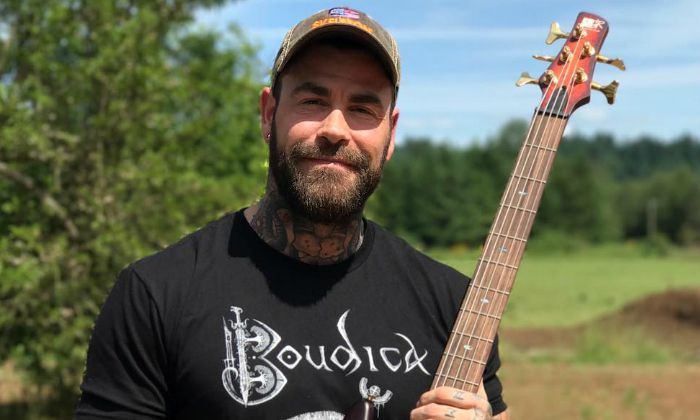 James Marshall Ramsey is an American tattoo model, firearm dealer, athlete, and Army Veteran from Portland, Oregon. Having served in the U.S. Army for over six years, he managed to return home without injuries, but unfortunately, he lost his right leg in a motorcycle accident when he went on a bike ride the day after the reunion.

As he moves forward with his life, he has made a career for himself that many would envy. He turned his passion into a career and today, James is one of the most successful tattoo models in the industry. He has also appeared on the covers of several renowned health and sports magazines as well as appeared on the hit IFC show Portlandia and TLC Say Yes To The Dress.

James Marshall Ramsey was born on the 5th of October 1980, in Portland, Oregon, United States of America. He is currently 41 years old.

James is the eldest son of Leora Michael, a biology major, and James Ramsey Sr. He is of Scottish Irish descent. He has one younger brother.

James attended Estacada High School in Estacada, Oregon. After graduating from high school, he entered into the delayed entry program for the U.S. Army.

James has been in a relationship with fellow tattoo model and photographer Heidi Lavon for four years now. The couple were engaged and lives together in Oregon.

Both his dad and grandfather were Army veterans. They inspired him a lot and he enlisted in the U.S. Army and was initially stationed at Fort Hood, a giant US Army base in Texas.

During his stint with the U.S. Army, James rose to the rank of Sergeant and was deployed in the Gulf, Iraq, and Afghanistan. After serving 6 years, he was honorably discharged.

After returning home from his last tour, James decided to go on a bike ride and never realized that it is going to cost him a lot. He entirely lost control over his bike when he came around and eventually hit a corner. It was a major accident that left him with a shattered pelvis, and a right leg above the knee amputation.

He was bedridden for several months and bounced back to begin the next chapter of his life. He fell in love with tattoos when he was young and got his first set of tattoos during his first years in the Army.

Over the years, James had inked almost his entire body with beautiful arts. He now has two full sleeves, arm, coverings, a full back piece, his throat, and the sides of his neck. The tattoo on his back is his favorite.

In 2015, James was discovered by Michael Stokes photography and the rest is history.

James is one such tattoo model who is going to take over the world. He has been an inspiration to a lot of youngsters and will likely continue to be. Just like other models, he uses social media to build his career.

His Instagram account, @james_m_ramsey has become the most popular of his social media handles, which has over 112,000 followers. His Facebook page, @Jamesramseyofficial has amassed over 42,000 followers.

He is now one of the most popular male tattoo models in the modeling world with a substantial fanbase.

He has been modeling over the last five years.

James is also a firearm dealer.

He loves metal music and worked as a guitarist for the metal band Boudica.

With admirers around the world, James has already proved that being an amputee can be inspiring and uplifting to other people.

James has been featured in every major tattoo publication as well as appeared on the hit IFC show Portlandia and TLC Say Yes To The Dress.