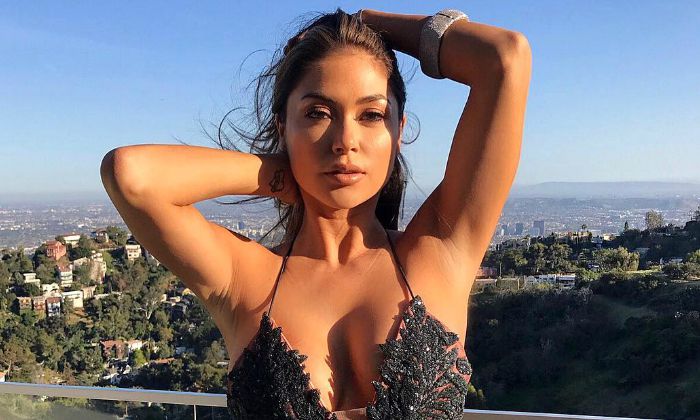 Arianny Celeste is a prominent figure in the modeling industry and a crowd-favorite ring girl at MMA shows, she is known for her stint as an Octagon Girl since 2006. As a ring girl, she usually wows her audience with the saucy outfits that make her one of the hottest UFC octagon girls out there. She has graced the covers of men’s magazines like FHM, Maxim, Playboy, and Sports Illustrated. She co-hosted the TV series Overhaulin on Velocity TV from 2014 until 2015. Blessed with an incredible body, Arianny knows exactly how to excite and stun her legion of Instagram fans by regularly sharing an arsenal of jaw-dropping racy pictures that put her enviable figure on display.

Arianny Celeste was born on the 12th of November 1985, in Las Vegas, Nevada, United States of America. She is currently 37 years old.

While much of the information regarding her personal life is kept hidden from the public eye, Arianny has Filipino and Mexican roots. Celeste attended Eldorado High School and majored in fitness management and nutrition at the University of Nevada, Las Vegas (UNLV).

Despite her popularity in the glamour world, Arianny prefers to keep all aspects of her personal life including the details of her parents, siblings, and her childhood away from the spotlight.

Needless to say, the brunette-haired femme fatale with infectious body measurements has been the dram-girl of several men. While the gorgeous ring girl is now single by relationship status, she has hooked up with many men in the past.

One such hook-up ended up in her arrest on charges of domestic violence when Arianny and her then-boyfriend Praveen Chandra hooked up in a hotel in Las Vegas. It was widely reported that Arianny hit Praveen on the nose with her high heels and he choked her several times during a quarrel. Shortly after her arrest, she was released on a bond of $3000.

Arianny had a fling with songwriter Travis Barker in 2015 and had dated mixed martial artists Josh Burkman, Tiki Ghosn, and Roger Huerta in the past.

The UFC ring girl Arianny Celeste has an incredibly stunning body that is complemented by a feisty personality, natural sex appeal, and tantalizing good looks. She never shies away from displaying her curvaceous figure in saucy outfits including bikinis, swimwear, and lingerie to her army of Instagram fans.

Celeste got her start as an octagon girl in 2006 at the Hard Rock Hotel and Casino in Paradise, Nevada. She has since grown to be the most popular ring girl in UFC history and has won several awards throughout her carer.

In addition to her successful ring girl career, Arianny Celeste has also been a successful model. She began her modeling career at the age of 15 and has worked with several renowned magazines such as Maxim, FHM, Playboy, Sports Illustrated, and Fighter’s Only. In November 2010, she landed on the cover of the nude issue of the most popular men’s magazine Playboy.

The brunette beauty, Arianny Celeste’s net worth stands at $3 million as of 2022. Having modeled for many magazines and brands, Celeste is now the most popular ring girl who pockets a lot of money from her octagon girl career, modeling, television appearances, and video gaming career, to name a few. She resides in Los Angeles, California, United States.

She has been in show business ever since she was a child. Her first acting gig was a television commercial for a car seat company.

She used to be a cheerleader in high school, and also trained in dancing and gymnastics.

Celeste is the first ring girl to surpass the million-dollar mark in net worth.

In 2010, she and Joe Rogan co-hosted the web series UFC Ultimate Insider.

On February 4, 2010, the illustrious Sports Illustrated magazine named her “Lady of The Day”.

That same year, Maxim featured her in the May 2010 issue cover and named her “The Hottest UFC Octagon Girl”.

For five years straight, Arianny Celeste has been included in Maxim’s Hot 100 list from 2010 through 2014.

In 2013, the UFC octagon girl along with other female mixed martial artists auctioned their sports bras on eBay in support of breast cancer research.