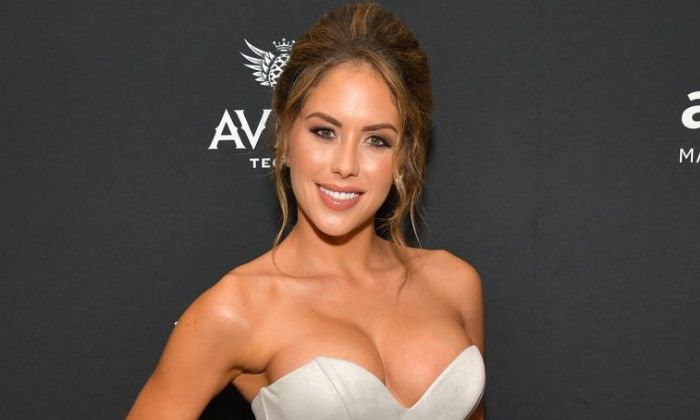 Brittney Palmer is an American model, actress, ring girl, and contemporary artist perhaps who hit the spotlight as a ring girl for the UFC Octagon. She won the Ringcard Girl of the Year at the World MMA Awards for two consecutive years in 2011 and 2013, respectively. She’s been featured across a plethora of renowned magazines like Playboy, Maxim, FHM, Fitness Gurls, Inside Fitness, and many more.

The multifaceted has also hosted a series called “Ultimate Answers,” which followed the lives of UFC fighters outside of the octagon. Outside the ring, she’s been identified as a contemporary artist known for her vibrant abstracts and portrait depictions of pop culture icons.

Brittney Palmer was born on the 24th of July in 1987, in San Diego, California, United States of America. She is currently 34 years old.

Speaking about her family and her early life, there’s not much known information about her parents, however, her family moved to Las Vegas when she was young.

Growing up in the entertainment capital of the world, Brittney has drawn by the glamour and glitz of the city at a young age. She explored her love for paintings and spent most of her life learning art.

Palmer studied classic portraiture at the University of California, Los Angeles in Los Angeles and graduated with a degree in visual arts. She then attended the Brentwood Art Center, a non-profit art school in Los Angeles, California.

She married radio host and investment banker, Aaron Zalewski, on May 10, 2014, in an oceanfront wedding in Pacific Palisades, California. His self-confidence and his Australian accent moved her when he approached her and asked for her number at a nightclub sometime in 2010.

Not long after that, they began dating each other and he proposed to her while they were on vacation in Melbourne, Australia. Aaron was arrested on June 11, 2015, on charges of murder attempt after allegedly hitting his wife to the floor and pinning her against a bed while grabbing her neck. He was released the next day posting a $1 million bail.

During an episode of the TV series, UFC 25 Years in Short, Brittney revealed that her ex-husband, Aaron, had died recently due to unknown reasons and she was doing art for him. Though it was speculated that Aaron might have died due to drug addiction, however, nothing has been confirmed.

Brittney Palmer made her big-screen debut in the 2013 sports film ‘Snake and Mongoose’, as Amy starring alongside actors such as Jesse Williams, Richard Blake, Ashley Hinshaw, Kim Shaw, and Noah Wyle.

Brittney started out her career as a dancer at the age of 18 and first appeared in Ultimate Variety Show, a full-fledged entertainment show featuring several acts ranging from comedy to dancing and music.

She then moved on to another show called Jubilee, where she did her own featured act and worked as an assistant to magician Natha Burton. After all these stints, Plamer was hired as a lead dancer in X Burlesque at The Flamingo Hotel and Casino. She mostly appeared on stage for most of her early life before becoming a ring girl working inside the cage.

Palmer briefly served as a ring girl in the World Extreme Cagefighting (WEC) until its merger with the Ultimate Fighting Championship (UFC). Moving on, Palmer, as a ring girl, is responsible for several ring activities including preparing players and rings for the next round of action, cheering the audience, and announces fights.

Having been in the glamor world for over a decade, Brittney Palmer has an estimated net worth of $850 thousand.

Brittney released a book of never before seen photos and paintings, titled The Model Art Book in 2018.

Palmer appeared on YouTube opposite model Jo Garcia, in a Mortal Kombat themed video, which boosted her modeling career.

She has her own clothing line called “Stone Free” through Jakt Apparel.

Her turn-ons are a sense of humor, ambition, and talent

Her musical tastes span from Jimi Hendrix to Frank Sinatra and the Rolling Stones.

Palmer is an accomplished self-made painter, whose artworks have been featured in popular shows and charity auctions across the globe.

She has graced the covers of Maxim, FHM, and Playboy.

Brittney has a few tattoos, including the one pictured on her right-hand shoulder, one on her lower back, and others.

She has her own calendar featuring her in swimsuits and beachwear.

Palmer was awarded Ring Card Girl of the Year at the World MMA Awards in 2012 and 2013, respectively.

Her Instagram page has garnered more than 1.2 million followers.