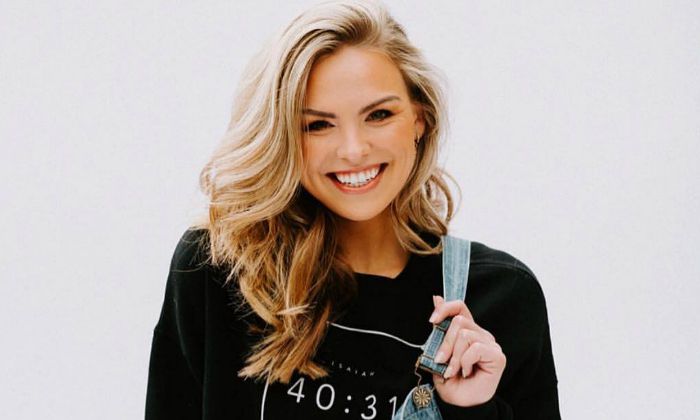 Former beauty queen and model Hannah Brown is perhaps best known for her appearance on season 23 of The Bachelor, starring Colton Underwood. She made it to the Top 7 before she was cast as The Bachelorette for the show’s 15th season, which premiered on the 13th of May. Brown won the Miss Alabama USA in 2018 and went on to compete in Miss USA 2018.

Hannah Brown was born on the 24th of September of 1994, in Tuscaloosa, Alabama, United States of America. She is currently 27 years old.

Talking about her family background, very little is known about Hannah’s parents and her childhood. Her father is Robert Walker Brown. She has a younger brother named Patrick. Although there is almost no information about her mother, she has apparently cited her mother as her role model. She shared a picture of her mother holding her from her back on Instagram on mother’s day last year!

Speaking about her personal life, Hannah is in a relationship with model Adam Woolard. They began dating in early 2021.

She has had dated a few men in the past, including Colton Underwood, the Bachelor on season 23. Things didn’t go well between the two and eventually, she was shown the door to her home.

Going through her Instagram feed, which is filled with photos of her family and close ones, it is certain that she was romantically involved in a few intimate relationships. She dated her long-time friend Brandon Hall from 2013 to 2016. They both graduated from the same high school and went to prom together in March 2013. During the three-year-long relationship, the two shared a strong bonding with each other, going to various places together. It looks like she broke up in January 2016, as they were not seen together after that.

She then had a short-term relationship with Austin Williams from early 2016 to mid-2017. In 2019, she became engaged to musician Jed Wyatt. They broke up shortly after she had found that he was cheating on her.

Hannah Brown made her first television appearance as a contestant in season 23 of The Bachelor, starring Colton Underwood. She was eliminated from the show during the Colorado episode on February 18, 2019, and finished 7th place.

Her parents were also graduates of the University of Alabama.

She began modeling in her early teens, competing in local Alabama teen pageants.

She went on to compete in Miss Alabama USA in 2013 and 2017, but unfortunately, she couldn’t bag herself a spot in the competition.

In 2018, she competed in Miss Alabama USA, eventually winning the competition and went on to compete for the title of Miss USA, but lost to Nebraska’s Sarah Rose Summers.

She and fellow Bachelor castmate Caelynn Miller-Keyes were roommates while they were competing in Miss USA.

Hannah Brown worked as an interior designer before participating in reality shows.

She is also a trained dancer.

Hannah suffered from depression and anxiety during her teenage years. She is also a mental health advocate.

She is a huge football fan and a member of the Alabama Crimson Tide.

In 2019, she won season 28 of Dancing with the Stars, in which she paired up with professional dancer Alan Bersten.

Hannah Brown won “The Competition Contestant of 2019” at the 45th People’s Choice Awards for her time as lead on The Bachelorette.