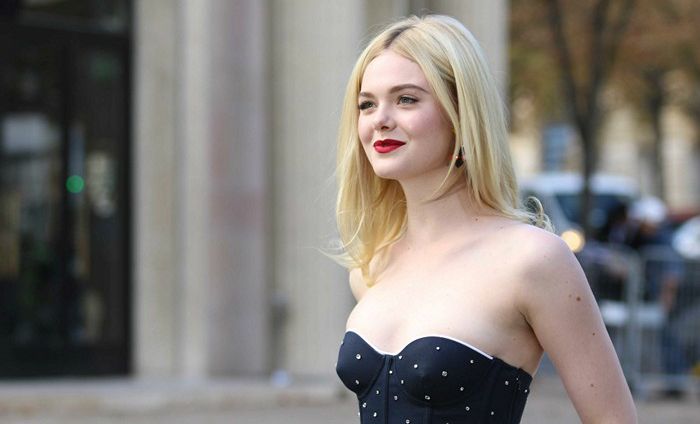 Elle Fanning is an American actress most widely known for her role as Alice Dainard in “Super 8”, which earned her a Spotlight Award at the Hollywood Film Festival. She is the younger sister of popular actress Dakota Fanning. She started her acting career at a very young age and soon established herself as an upcoming young actress in Hollywood, thanks to her beautiful looks and amazing onscreen persona. Her acting credits include “Phoebe in Wonderland”, “Somewhere”, “Maleficent”, “20th Century Women”, and “The Neon Demon”.

Elle Fanning was born on the 9th of April 1998, in Conyers, Georgia, United States of America. She’s currently 24 years old.

Elle Fanning is the youngest of the two children of Steven J. Fanning and Heather Joy (née Arrington). Her father played minor league baseball for teams affiliated with the St. Louis Cardinals and now works as an electronics salesman in Los Angeles while her mother was a professional tennis player.

She has an older sister named Dakota Fanning, who is also an actress. Fanning is of Irish, English, French, German and Channel Islander descent. She graduated from Campbell Hall School, North Hollywood, Los Angeles in June 2016.

Elle Fanning has been in a relationship with English actor and screenwriter, Max Minghella since 2018.

Elle Fanning made her acting debut at the age of three when she played the younger version of her older sister Dakota’s character in the film “I Am Sam” in 2001.

Her first leading role in a film came in 2008 when she played Phoebe Lichten in the film “Phoebe in Wonderland”. Directed by Daniel Barnz, the film had actors Felicity Huffman, Patricia Clarkson, and Bill Pullman. The film centers around the life of a nine-year-old girl who suffers from Tourette syndrome.

Elle’s won her first acting job as Allie keys in 2001 in a sci-fi TV mini-series “Taken”. She was cast as the younger version of her older sister Dakota’s character in that series.

Elle Fanning earned a lot of appreciation and popularity for her role as Alice Dainard in an American sci-fi thriller “Super 8”. Directed by JJ Abrams, the film was overwhelmingly received by critics and the audience earning her and the team several awards. The film centers around a group of teenagers who are forced to deal with strange happenings in their small town.

She played the significant role of Aurora in Robert Stromberg’s dark fantasy film, “Maleficent” alongside actors Angelina Jolie, Sharlto Copley, Sam Riley, and Imelda Staunton. The film was released in 2014 to critical acclaim and also received an Oscar nomination.

Fanning has done endorsement work for Target, Toyota, and Smuckers.

She was featured in the J. Estina commercial along with her sister Dakota.

She is a born actress who made her start in show business at the age of two years and eight months. She played the younger version of her sister, Dakota Fanning’s, character Lucy in the drama film I Am Sam (2001) and again as Allie in Taken (2002).

Fanning was only three and a half years old when she attended her first Hollywood premiere.

She learned to play the piano at a very young age.

She took ice skating lessons for six weeks for her role as Cleo in the 2010 film Somewhere.

Elle is scared of thunderstorms and lightning.

She was made the face of Marc Jacobs and Rodarte at the age of 13 years old.

Elle was originally considered for the role of Art3mis in Ready Player One (2018) but it finally went to Olivia Cooke.

She became the youngest jury member of the international competition at the 72nd annual Cannes Film Festival.

She plays the lead role of Catherine the Great in the Hulu series The Great, which premiered on May 15, 2020.