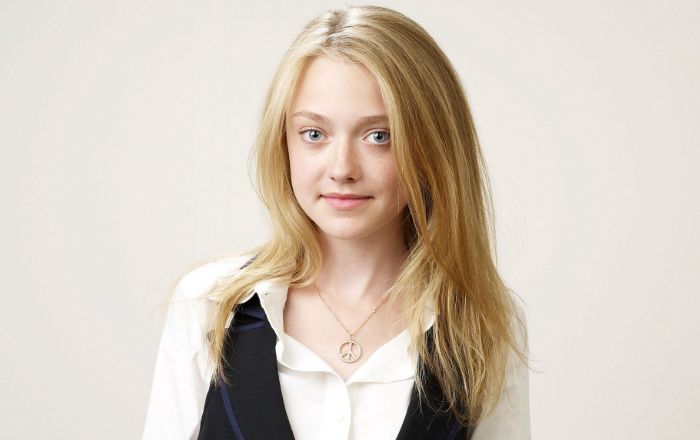 Dakota Fanning is an American actress best known for her roles in movies like “War of the Worlds”, “Charlotte’s Web”, “Uptown Girls”, and “Ocean’s 8”. She first gained fame for her appearance as Lucy Dawson in “I Am Sam”. She received a Screen Actors Guild Award nomination at the age of eight years old making her the youngest nominee in SAG history. After establishing herself as an actress in Hollywood, she branched out to modeling in 2009 and appeared in a number of fashion shows. She also appeared on the covers of fashion magazines like Elle, Vanity Fair, and Cosmopolitan.

Dakota Fanning was born on the 23rd of February 1994, in Conyers, Georgia, United States of America. She is currently 28 years old.

Dakota is the oldest daughter of Steven J. Fanning and Heather Joy (née Arrington). Her mother was a professional tennis player and her father was a baseball player who played in minor league matches and now works as an electronics salesman in Los Angeles, California. She has a younger sister, Elle Fanning, who is also an actress.

Dakota Fanning graduated from Campbell High School located in North Hollywood, California in 2011. There she was part of the varsity spirit cheerleading squad and was voted homecoming queen. She then attended the Gallatin School of Individualized Study at New York University, where she majored in women’s studies, with a focus on the portrayal of women in film and culture

Dakota Fanning began dating British model Jamie Strachan in 2013. He is 10 years older than her. They broke up in 2016. She then dated Logan Markley for over a year before calling it quits.

Dakota Fanning made her acting debut as a child actress playing her role as “Little girl in Park” in the 2001 American sex comedy film, “Tomcats”.

Dakota had her first television American medical drama television series created by novelist Michael Crichton, ER for her role as Delia Chadsey. She just appeared in a single episode titled “The Fastest Year” in 2000.

Her portrayal of  Lucy Diamond Dawson in “I Am Sam (2001)”, alongside stars Sean Penn and Michelle Pfeiffer helped her to gain a lot of traction among the international audience. She received lots of appreciation and fame for her role in the film. She became the youngest person to be nominated for the Screen Actors Guild Award and also won the Best Young Performer Award from Broadcast Film Critics Association for her performance.

As of 2023, Dakota Fanning has a net worth of $12 million. She plunged into show business at a very early age and today she is one of the successful actors in Hollywood. She made her fortune from film and television appearances.

Dakota kick-started her acting career at the age of five years old when she was cast in a Tide detergent commercial.

Apart from acting, she loves to play the piano and the violin. Her hobbies include knitting, collecting dolls,  horse riding, and dancing ballet.

She had her first kiss with actor Thomas Curtis in the movie, Sweet Home Alabama (2002).

She can be seen as a Manson girl Squeaky Fromme in the Quentin Tarantino film “Once Upon a Time in Hollywood” (2019).

She voiced the character Miranda Worth in an anime-style wed series, “gen:Lock”, in 2019.