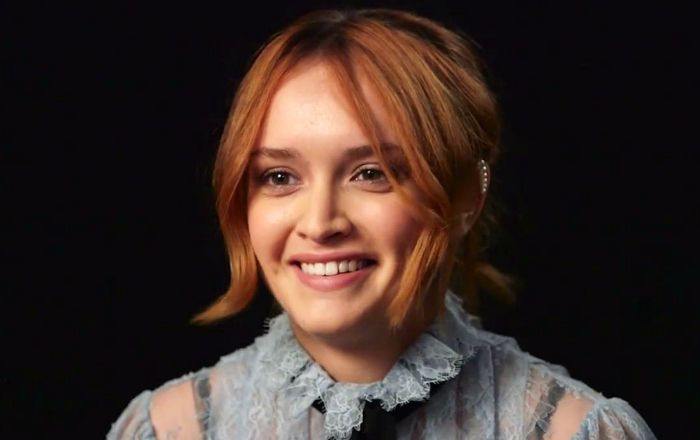 English actress Olivia Cooke is best known for her starring role as Emma Decody on the A&E drama-thriller series Bates Motel. She has also starred in different genres of films including The Quiet Ones (2014), Ouija (2014), The Signal (2014), Me and Earl and the Dying Girl (2015), The Limehouse Golem (2016), and Thoroughbreds (2017). Cooke was cast as Samantha “Sam” Cook in Steven Spielberg’s science fiction film Ready Player One.

Cooke is the oldest of the two children of John Cooke, a retired police officer, and Lindsy (née Wild), a sales representative. She has a younger sister named Eleanor Cooke.

She graduated from Royton and Crompton Secondary School in the Metropolitan Borough of Oldham, Greater Manchester. Cooke then attended Oldham Sixth Form College to study drama but dropped out before the end of her A-levels to pursue acting.

Olivia Cooke has been in a relationship with American actor Christopher Abbott since 2015.

Olivia Cooke made her debut appearance in the 2014 British supernatural horror film, ‘The Quiet Hours’ directed by John Pogue.

Her first television appearance was with the BBC One drama miniseries Blackout in which she played Meg Demoys for three episodes.

In 2014, Cooke supported the Save the Children campaign by appearing in Bulgari advertisements.

The English actress has an estimated net worth of $2 million US dollars as of 2019. Most of her earnings come from film and TV appearances and not to mention lucrative brand endorsement deals.

Olivia has no presence on social media but there are several parody accounts under her name.

She learned ballet and gymnastics at a young age.

Beginning her acting career at the age of 8 years when she appeared on an after-school drama program in her hometown, called the Oldham Theatre Workshop.

Cooke played the title character on Prom: The Musical, a remake of Cinderella at Oldham Theatre.

She applied to the Royal Academy of Dramatic Art (RADA) many times, but she couldn’t able to make it even though she cleared the final round of auditions.

Cooke is close friends with her Me and Earl and the Dying Girl co-star Thomas Mann, and her Bates Motel co-stars Freddie Highmore and Nicola Peltz.

In 2015, she voiced for the character ‘Loch Ness Monster’ in an episode of Axe Cop.

In 2018, She was cast as Art3mis in Steven Spielberg’s science fiction thriller Ready Player One alongside Tye Sheridan, Ben Mendelsohn, and Mark Rylance.