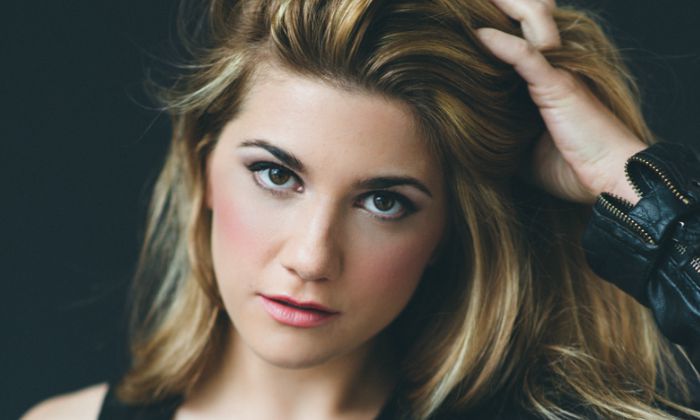 Who is Elise Bauman?

Elise Bauman is a Canadian actress and singer probably best known for her portrayal of Laura Hollis, the lead character on the Vervegirl TV web series Carmilla. Her other notable performances include parts in How to Buy a Baby, Mary Kills People, Frankie Drake Mysteries, The Handmaid’s Tale, Murdoch Mysteries, and Almost Adults. In 2018, Elise won the Cogeco Fund Audience Choice Award at the 6th Canadian Screen Awards for her performance in The Carmilla Movie. In addition to being an actress, she has also helmed a few music videos such as Keep Going for Ellevan, Time Tells for Kaitlyn Alexander, and Shine On for Ghost Caravan.

Elise Bauman was born on the 23rd of October 1990, in Kitchener, Ontario, Canada. She is currently 30 years old.

Regarding Bauman’s personal life, she is a very private person and not much is known about her family and her early life other than the fact that she grew up along with her older brother in her hometown.

For education, she was homeschooled for most of her life however she attended Rockway Mennonite Collegiate, located in her hometown of Kitchener, Ontario, Canada. She then moved to New York to pursue acting and took acting lessons at the Circle in the Square Theatre School.

Talking about Bauman’s romantic life, she is very reluctant to discuss her relationship status and dating history with the media. Though she came out as Bisexual in 2017, she prefers not to share anything regarding the love life that eventually leads many to believe that Bauman might be single, however, she hasn’t confirmed or denied anything.

Elise Bauman earned her first acting gis as a Theatre School Student in the 2015 drama film Everything’s Gonna Be Pink.

In 2014, she had a guest spot on an episode of the series called Worst Thing I Ever Did where she played the role of Fallon.

That same year, Elise was cast as Laura Eileen Hollis in the web series Carmilla. The series was co-created by Jordan Hall, Steph Ouaknine, and Jay Bennett which is based on the novella of the same name by Sheridan Le Fanu. She co-starred with Natasha Negovanlis in the series which had its run for three seasons from 2014 to 2016.

On December 11, 2016, Elise released her debut album titled Elevation with Ellevan on Bandcamp. The digital album had featured a total of seven tracks including Do You, Make Time, Ego, More, A Message From a Jazz Bar in New York, Came Along, and Thank You and Good Night.

Though Bauman has achieved great success as an actress, nothing is known about her net worth or her remuneration. But several sources have claimed her to be worth around $1 million.

As a passionate actress, which naturally means that Elise Bauman is very active on social media. She uses social media to connect with her fans as well as to promote her upcoming projects. She has over 150 thousand Instagram followers to which she shares pictures from her everyday life, travel diaries, and other activities. Elise has over 105 thousand followers on her Twitter account, @baumanelise.

She pursued acting at a very young age by appearing on stage plays and played Anya in the graduating classes’ production of The Cherry Orchard.

She gained notoriety through her involvement in LGBT activities that lead to huge attention on social media.

Elise was previously on a pescetarian diet and is no longer into the diet.

In 2018, Bauman won the Cogeco Fund Audience Choice Award at the 6th Canadian Screen Awards for her work on Carmilla.

Elise played soccer while growing up and used to wear jersey number 10.

She has appeared on multiple episodes of Pillow Talk on TheGAYWOMENChannel.