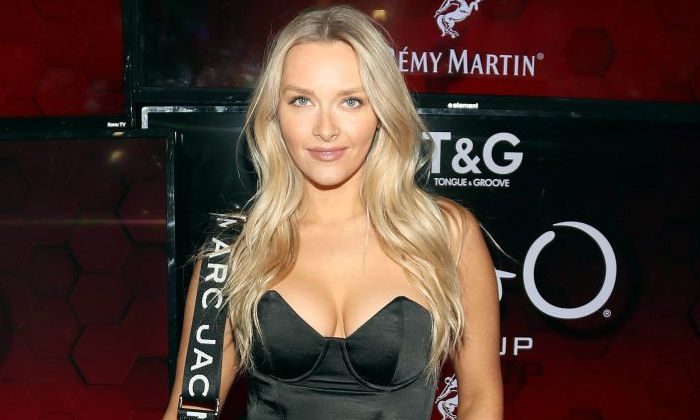 Camille Kostek is an American model who caught the spotlight after she appeared on the cover of the Sports Illustrated Swimsuit edition in 2019. She shot to fame earlier for her infamous relationship with New England Patriots tight end Rob Gronkowski. She used to be a cheerleader for the team and also served as their spokesperson in various television shows. Camille landed a solo cover in her rookie year after she won the Sports Illustrated Swimsuit Model Search in 2018.

Camille Kostek was born on the 19th of February 1992, in Killingworth, Connecticut, United States of America. She is currently 29 years old.

Camille Kostek is the eldest of four children to to Alan, a contractor, and Christina, a gym manager. She has Polish, Irish and Jamaican lineage. She has three younger siblings, brother, Thomas Kostek, and two sisters, Julia Kostek and Alina Kostek.

Kostek attended Haddam-Killingworth High School and graduated from the school in 2010. She then got admitted to the Eastern Connecticut State University where she took communications as major. During her college years, she used to be a member of the dance squad and was also on the Dean’s List.

Camille has been in an on-again and off-again kinda relationship with England Patriots star Rob Gronkowski since 2015. They dive their time between Foxborough, Massachusetts, and Tampa, Florida.

Camille Kostek made a guest appearance in the sports-comedy talk show, The Barstool Rundown: Live from Houston in 2017.

She got inclined towards television industry when she was young and worked as an anchor and writer for her high school’s broadcasting programs. She later joined local news channels as a reporter and also co-hosted lifestyle and red carpet events for big names in the glamour world.

As a model, Camille Kostek has featured in commercials for Nissan Barberino, Ciao Bella, Zudy Vinyl, Neoscape, and Rebag.

In addition, she modeled for brands like Dune Jewelry, Equinox Fitness, Reebok, and Benrus.

Her stint as a cheerleader for the New England Patriots and her relationship with the NFL star Rob Gronkowski.

Camille Kostek has an estimated net worth of around $3.4 million, earned from her successful modeling career.

Being in the creative industry for over five years, she has amassed an incredible amount of fan following across social media platforms. Besides, she is also very much active on Instagram where she posts her photo-shoots, television appearances, and day-to-day activities. Her official Instagram handle has nearly 1 million followers whereas her Twitter page has more than 54 thousand followers.

Her favorite television reporters are Giuliana Rancic and Maria Menounos.

She took ballet lessons at a tender age of three and continued to excel in the field through intensive training from Broadway Dance Center in New York City.

In school, she was a cheerleader and lacrosse varsity captain.

In 2013, she became the cover girl of her college’s annual Swimsuit Calendar.

She worked as a fitness instructor in college and was featured in WTNH’s CT Style.

During her stint as a reporter, she has hosted and corresponded for South by Southwest, the Super Bowl and Levitate Music Festival, as well as lifestyle, red carpet and sports events for Maxim and Sports Illustrated, among others.

She turned down the ESPN’s offer to host the Saturday Night Football as she was more interested in modeling.

Camille Kostek began her modeling career in 2015. She modeled for Jessie James Decker’s fashion line Kittenish in 2017 and walked the runway for the brand at the 2018 New York Fashion Week.

She made her catwalk appearance for the SI Swimsuit Fashion Show at the 2017 Miami Beach Swim Week and a year later, she won the Sports Illustrated Swimsuit Model Search in March 2018.

Camille is an accomplished dancer.

In 2019, she appeared on the cover of the Sports Illustrated Swimsuit.