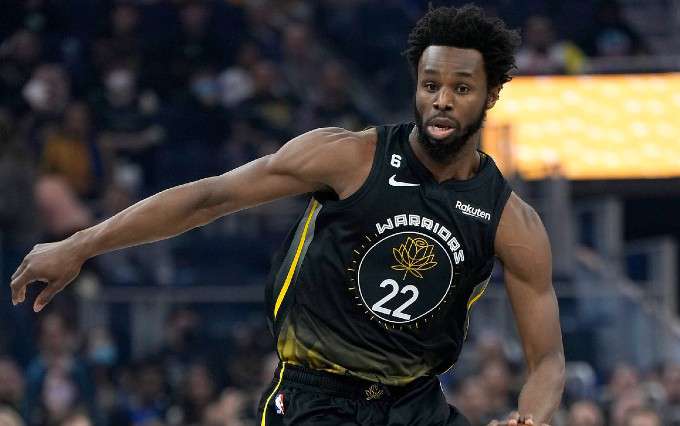 Andrew Wiggins, 27 years old and 6.59 feet, is a professional basketball player born in Toronto, Ontario, Canada. He went to high school at Vaughan and Huntington Prep. Before the NBA draft, Andrew Wiggins went to the University of Kansas. Then, by the Cleveland Cavaliers, he was the 1st pick in the first round in 2014. The player was also ranked the number #1 Canadian sports star by OLBG.com.

The first pick in the 2014 draft, the Canadian was selected by the Cleveland Cavaliers but traded to the Minnesota Timberwolves that night. After five seasons with the Minneapolis team, Wiggins was traded to the Golden State Warriors in 2020.

Before the NBA, Wiggins defended the Kansas Jayhawks team for one season in college basketball. The Canadian averaged 17.1 points, 5.9 rebounds, and 44.8% on field goals.

One of Canada’s greatest basketball players, Wiggins, is nicknamed “Maple Jordan” after the former Chicago Bulls star. Also, for his consistency in Warriors games, Steve Kerr nicknamed him “Mr. Consistent.”

Wiggins didn’t emerge as the big star everyone imagined, but he found his place in the league. In 2014-15 he was elected rookie of the year, but in 2021-22, he reached star level, receiving an invitation to participate in the All-Star Game.

The sports gene runs in the family. Andrew’s father, Mitchell Wiggins, played in the NBA for six seasons in the 1980s, while his mother, Marita, won two silver medals at the 1994 Olympics.

In addition, Wiggins has a basketball player brother: Nick Wiggins, a winger who defended the colors of Bauru and Cerrado in the NBB.

Since 2019, Wiggins has donated $22 for every point scored in the NBA. Thus, in the last three years alone, the Warriors star has already donated more than US$ 76,800 to underprivileged children unable to play sports.

In October 2017, Wiggins signed a five-year contract with the Minnesota Timberwolves. The deal runs through 2022-23 when the star will receive $33.6 million from the Golden State Warriors.

In all, Wiggins has accumulated more than 600 games in the NBA. Until September, he had 11,961 points, 2,841 rebounds, and 1,443 assists in the league. His best game regarding issues was on November 13, 2016, against the Los Angeles Lakers, when he scored 47 points. In rebounds in the same game, his record was, against the Los Angeles Clippers, on March 8, 2022, when he grabbed 11 rebounds. Finally, his most assisted day was on January 18, 2020, when he distributed 11 assists against Toronto.

According to ESPN journalist Kendra Andrews, star Andrew Wiggins has extended his contract with the Golden State Warriors through the 2026/27 season. Earlier, the Californian team had done the same with Jordan Poole for four years.

However, Wiggins’ values ​​are smaller than Poole’s. While the young guard will receive US$140 million for four years, the All-Star in 2022 will have US$109 million for the same period. As a result, the Warriors will face the luxury tax. According to ESPN reporter Bobby Marks, it will pay US$483 million in fines.

Despite everything, the San Francisco team’s board “doesn’t care” about such fines. In the 2021/22 season, when the team became champion over the Boston Celtics, values ​​reached US$170.8 million in fees alone. Adding salaries, the total was $346 million.

In the 2021/22 season, Wiggins was elected to the All-Star Game for the first time in his career. Pick number 1 of the 2014 Draft. The athlete arrived at the Warriors after a trade with the Minnesota Timberwolves. He averaged 17.2 points, and 4.5 rebounds, in addition to a 39.3% success in three-point shooting in the last campaign.