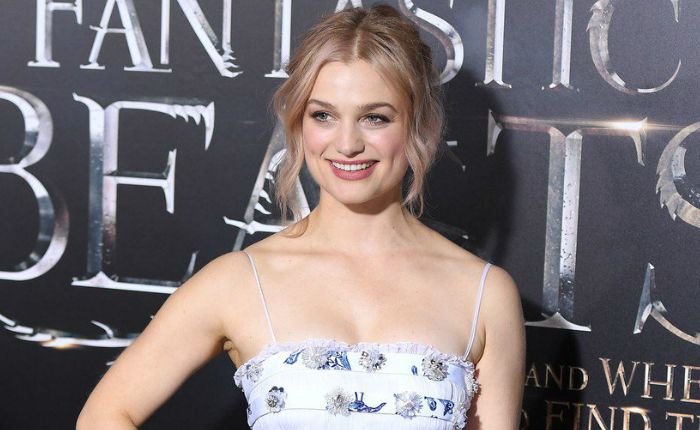 Alison Sudol is an American singer and actress who gained a lot of fame lately for her role as Queenie Goldstein in Fantastic Beasts and Where to Find Them (2016) and Fantastic Beasts: The Crimes of Grindelwald (2018). She goes by the moniker A Fine Frenzy, best known for her albums ‘One Cell in the Sea’ and ‘Bomb in a Birdcage’.

Alison graduated from high school at the age of 16. She was “nerdy and quiet” in school and was so nervous about going into college. She fell in love with music as a teen and thus she took two years to find out what was going with music. At 18, she decided to pursue a career in music and she didn’t go to college.

Alison Sudol is the daughter of dramatic arts teachers, Sondra (Fraser) West-Moore, and acting coach John Sudol. Her parents divorced when she was five years old.

Sudol has been in a relationship with Stranger Things actor David Harbour for a while. While not much is known about their love life, the two have frequently red carpet appearances.

She was linked to singer Josh Groban in the past.

Alison Sudol made her acting debut with a minor role in the film ‘Here Dies Another Day’ in 1997. She was credited as Alison Monro in the film.

After being cast in a string of feature films and short films, she got her first major break with David Yates’ fantasy film ‘Fantastic Beasts and Where to Find Them.’ She played the role of Queenie Goldstein, the younger sister of Tina (played by Katherine Waterston), alongside Newt Scamander (played by Eddie Redmayne). The film was a huge commercial success and she reprised the role in the film’s 2018 sequel, Fantastic Beasts: The Crimes of Grindelwald.

In 2007, Sudol made her first television appearance, playing Nova Kent in an episode of the CBS police procedural drama series ‘CSI: NY’.

Sudol first found success with the release of her debut album “One Cell in the Sea” in 2007. The album charted on many music charts including the
US Billboard 20 at #91. It was certified Gold and Platinum by IFPI AUT and BVMI, respectively.

Her role as Queenie Goldstein David Yates fantasy film ‘Fantastic Beasts and Where to Find Them.’

She has appeared in a number of TVC including the Banana Republic advertising campaign.

Born in Seattle, Washington, Alison moved to Los Angles, California with her family after her parents divorced when she was five years old. She grew up in Los Angeles.

While growing up, she listened to a wide range of music, including Aretha Franklin, Ella Fitzgerald, and swing. That’s how she developed a strong liking for music at her adolescent age itself.

According to Sudol, her biggest musical influences are Bob Dylan, Johnny Cash, and Simon and Garfunkel.

She adopted her band’s name “A Fine Frenzy” from a verse in William Shakespeare’s A Midsummer Night’s Dream.

Sudol learned piano all by herself and got signed by Jason Flom after he listened to her play.

She gave her first vocal performance at the Lanterman Auditorium in La Canada Flintridge.

She is Greenpeace’s first Arctic Ambassador.

In 2014, she had a recurring role as Kaya in the first season of the Amazon web series Transparent.

In January 2015, Elle named Sudol one of “The 7 Most Exciting Newcomers on TV this Season”.