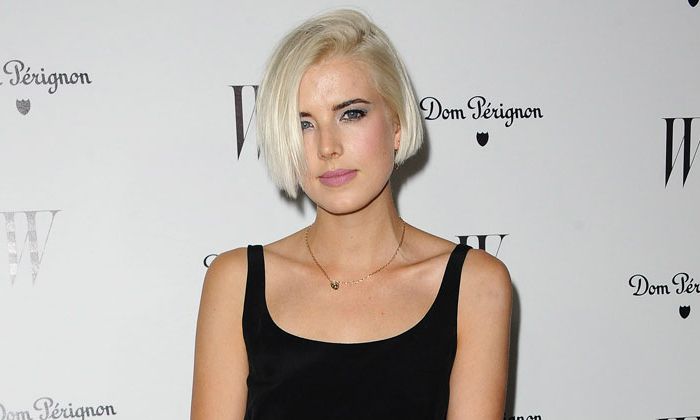 Agyness Deyn is a popular fashion model and actress from Littleborough, near Rochdale in Greater Manchester. She has appeared in advertisements for several high-profile fashion brands like Blugirl by Blumarine, Burberry, Cacharel, Doc Martens, Gianfranco Ferré, Shiseido, and Giorgio Armani. Furthermore, she has been featured in numerous magazines like Vogue, Pop, Grazia, Time, and many others. Her acting credits include ‘Clash of the Titans,’ ‘Electricity,’ ‘Patient Zero,’ and ‘The Titan.’

Agyness Deyn was born on the 16th of February 1983, in Littleborough, Greater Manchester, England. She is currently 39 years old.

Agyness Deyn was born the second of three children to parents Ken Hollins and Lorraine. Her father worked at Royal Mail while her mother worked as an ENT Nurse at Liverpool Hope Hospital. She has two siblings, one older and one younger sister named Emily.

Deyn has been married twice. Her first marriage was with American actor Giovanni Ribisi, which lasted for three years from 2012 to 2015. The couple broke up in December 2014 with their divorce being finalized in February 2015.

She married hedge fund manager Joel McAndrew in New York on August 28, 2016. The two have been living together in New York.

Deyn landed her first acting gig, playing Aphrodite, the Greek goddess of beauty, love, and sex in the 2010 film Clash of the Titans.

Though Agyness Deyn hasn’t released a full-length studio album to this date, she has released a few tracks. She is known for being a member of the now-defunct band “Lucky Knitwear”.

Deyn provided vocals for the single “Who” by Five O’Clock Heroes as well as featured in the music video for the same. She can also be heard in the starting seconds of Rihanna’s music video for “We Found Love”.

Deyn was discovered by a modeling scout while shopping with her best friend and fashion designer, Henry Holland, in Kentish Town, London.

Before fame, she did a few odd jobs including a bartender and also worked in a fast-food restaurant.

She achieved fame and recognition soon after she landed on the cover of the Italian Vogue November Edition.

In 2007, she was voted British Fashion Council Model of the Year.

In February 2008, she was on the cover of the Time magazine Style & Design issue.

Deyn outranked Kate Moss as the most glamorous face of fashion since 2007.

Over the years of her successful modeling career, she has launched her own line of accessories, shoes, and clothing in collaboration with major fashion brands.

Agyness has kept her short hair since 13.

At age 16, she won the Rossendale Free Press “Face of ’99” competition.