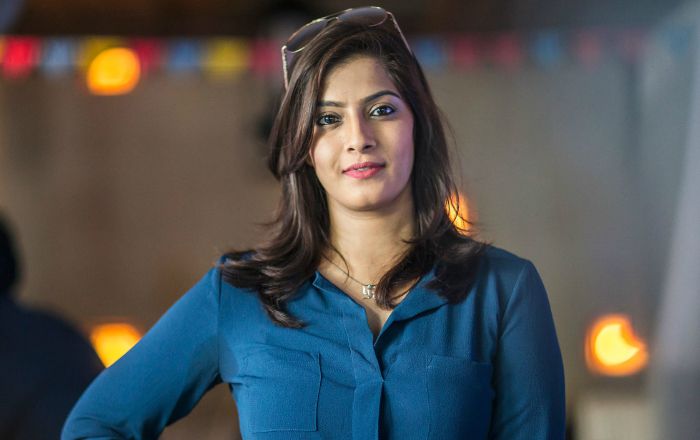 Indian film actress Varalaxmi Sarathkumar is known for her works in the Tamil, Malayalam, and Kannada film industries. She is known for her roles as Nisha in Podaa Podi, Sooravali in Tharai Thappattai, and as Kamala in the Malayalam film Kasaba. In 2018, she won Ananda Vikatan Cinema Awards for Best Villain – Female for her power-packed performance in Sarkar and Sandakozhi 2.

Varalaxmi Sarathkumar was born on the 5th of March 1985, in Chennai, Tamilnadu, India. She is currently 37 years old.

Varalaxmi is the eldest of four children of actor Sarathkumar and Chaya. She has three siblings, a younger sister Pooja, a younger half-brother Rahul and step-sister Rayanne Hardy. Actress Raadhika is her stepmother.

Varalaxmi earned her bachelor’s degree in microbiology from Hindustan Arts and Science College, Chennai with a Master’s in Business Management degree from the University of Edinburgh. She learned acting at Anupam Kher’s Acting School in Mumbai.

She was romantically linked with actor Vishal in the past. There are no details on who she is dating as of now.

Varalaxmi made her first silver screen appearance when she played the leading lady in the 2012 Tamil drama film Podaa Podi alongside Silambarasan, directed by Vignesh Shivan.

Having played the lead roles in films like Podaa Podi, Tharao Thappattai, Kasaba, and Vikram Vedha.

The budding actress is trained in different dance forms like Bharatanatyam, Ballet, Jazz, and Hip-hop.

She has been affiliated with the Hot Shoe Dance Company for almost eight years before making her stint in acting.

She owns a production house.

In 2018 she starred in movies including Sandakozhi 2, Echcharikkai, Kanni Raasi, Shakthi, and Mr. Chandramouli.